Newspaper Twitter accounts with the highest click-through rates tend to follow more people, customise tweets for Twitter and engage in more conversation, according to an analysis by Patrick Scott in the first of a series of three posts.

The number of followers a Twitter account has is often assumed to be representative of the influence they command. But is it what we should be measuring?

An initial analysis on my blog suggested that as far as engagement goes it doesn’t matter whether you have millions of followers, hundreds of thousands, or just thousands receiving your updates.

On average fewer than 0.5% of followers – of celebrities, a magazine and a local newspaper account – clicked on links shared.

In this post we analyse click-through rates of ten newspaper Twitter accounts and find that the proportion of followers that click on links varies enormously: from almost 1 click for every 100 followers to 4 in every 10,000.

Whether the paper is operating on a model that rewards the number of clicks the site gets or on a subscription based model, social media must be used as a way of attracting business.

I analysed the click-through rate of 10 regional papers across a range of owners and locations. The results can be seen in the graph below.

As with my initial research the data shows that click-through rates represent a tiny fraction of the amount of followers a newspaper has.

Followers per followed – a metric of engagement?

The most interesting trend in the data shown here is the relationship between click-through rate and the number I have slightly confusingly called ‘Followers Per Followed’.

If you flick from chart to chart in the interactive version you will notice that the papers with a higher click-through rate by and large also have a lower ‘Followers Per Followed’ ratio.

In other words, the most successful newspaper Twitter accounts (as far as click-through is concerned) follow more people, relative to their own follower numbers.

This flies in the face of the notion that it is cool to have many more people following you than you follow.

It does not, however, necessarily mean that following people back in itself results in more click-throughs.

Following more Twitter users may be a symptom of something else – a latent variable: for example, in indication of how engaged an account is with its own followers.

For instance, The Oxford Times, which does badly on click-throughs, appears to automatically republish web headlines with very little regard to how they appear on a Twitter feed.

In contrast to this the Northampton Chronicle, which does well on click-throughts, tweets headlines that are designed to be read on Twitter and are more attention-grabbing as a result. 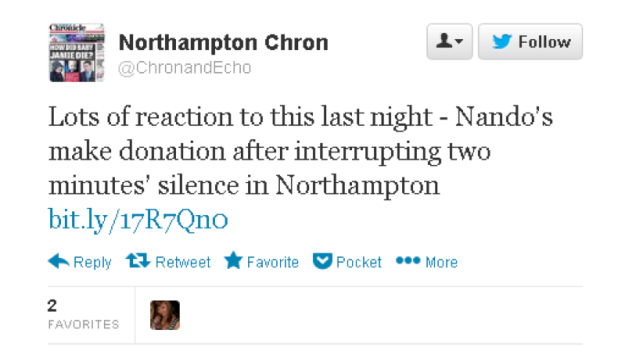 We also looked at the number of @ tweets or hashtags that the paper was using.

This showed a similar difference in approach between the Northampton Chronicle – which posted around 8 @ tweets in 24 hours – and The Oxford Times, which don’t post any.

The Northampton Chronicle engages with more people – and they engage back.

On a group level Johnston Press Newspapers titles (Northampton Chronicle, Scotsman and LEP) hammer the competition in terms of click-through rates and re-tweets (although the retweet measure is not as significant). 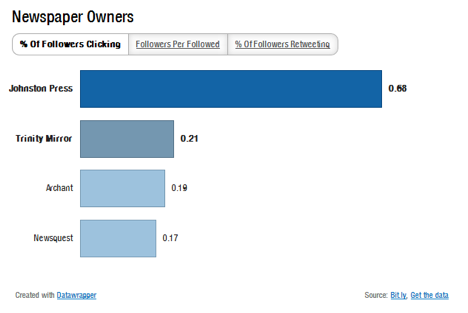 Judging from the recent profit announcements made by Johnston Press it probably couldn’t hurt for other newspaper owners to take a leaf out of their book.

*Disclosure: Patrick is a student of mine on the MA in Interactive Journalism

7 thoughts on “Newspapers on Twitter: who has the most click-throughs – and why?”