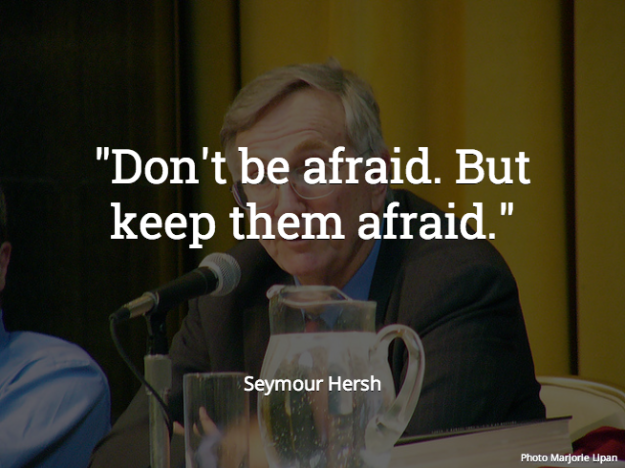 On Friday I was at the Logan Symposium on secrecy, surveillance and censorship, an event which, as is often the case with these things, managed to be inspiring, terrifying, and confusing in equal measure.

Notably, Director of the Centre for Investigative Journalism Gavin MacFadyen opened the day by talking about investigative journalists and hackers together.

It is common to hear attacks on journalists mentioned at these events, but rare to hear an old-fashioned hack like MacFadyen also talk about the “growing number of hackers being imprisoned”, while noting the commonalities of a desire for a free press, free speech, and “a free internet”.

For over a decade web developers with an interest in open data – that is all that “hackers” really means here – have been on the outside of journalism, with initiatives like MySociety and Open Corporates woefully under-recognised. This conference suggested an important change in that respect.

Seymour Hersh was undoubtedly the star turn of the first day, opening with a Q&A with was littered with soundbites, ending with the quote that heads this post.

The other that stood out was this one:

Such a great quote it deserves an image all of its own: #LoganCIJ14 pic.twitter.com/Fhhpr5Eycs

Some observers on Twitter found the quote somewhat opaque in isolation. His point was that reporters should seek alternative perspectives, stories and voices that weren’t already being reported. Because, as he later added:

'If there's a social revolution in the U.S., the New York Times won't know about it for 6 months' – Seymour Hersh #LoganCIJ14

Why surveillance in India matters in the UK

Facilities for intercepting transmissions from foreign satellites, according to O Globo

Later Duncan Campbell would talk about his investigations into communications interceptions systems (you can find a history going back to 1964 here) and James Bamford about his decades of writing about the NSA.

It was created “outside of normal laws… NSA doesn’t have to follow any other rules unless NSA is specifically mentioned. If a president says “all domestic agencies must cease domestic eavesdropping”, the NSA would not be included in that.

That historical context in many ways set the scene for Maria Xynou to talk about surveillance in India.

With its lawful intercept and monitoring (LIM) system, National Intelligence Grid (NATGRID) and Crime and Criminal Tracking Network & Systems (CCTNS), India sticks out as a particularly weak link in communications security given what we already knew about sharing of information between US and other countries’ intelligence systems.

As one person would later point out, chances are that the call centre handling your bank transfers is based in India. And as Xynou writes elsewhere:

“Security agencies using LIM systems are capable of launching a search for suspicious words, resulting in the indiscriminate monitoring of all Internet traffic, possibly without court oversight and without the knowledge of ISPs.”

There was more, but I’ll let others write about that, including Stuart Dredge’s liveblog.

A livestream of the day can be found on the symposium website, but youth news organisation newsPeeks were more easily accessible with their live broadcasts on YouTube: hopefully they’ll get the contract to supply the livestream next time.

You can watch Seymour Hersh being interviewed by newsPeeks after his appearance in this clip:

4 thoughts on ““Don’t be afraid: keep them afraid” and other notes from the Logan Symposium on surveillance’s first day”