We are in the golden age of verification: a generation of journalists trained to process content rather than check it; the culling of the subs who used to; and a generation raised on bullshit with the means to check it and the networks to exchange notes.

This week alone saw two of the best examples of debunking you’re likely to see all year: BuzzFeed’s dismantling of the output of news agency Central European News (CEN); and the crowdsourced critique of a letter purporting to be from ‘businesses supporting the Conservative Party’.

The BuzzFeed story was comprehensive and damning. This wasn’t just one fake story: it was one after another after another.  “In recent years,” they wrote:

“CEN has become one of the Western media’s primary sources of tantalising and attention-grabbing stories. They’re often bizarre, salacious, gruesome, or ideally all three: If you’ve read a story about someone in a strange country cutting off their own penis, the chances are it came from CEN.

“The Chinese woman offering to sleep with men to fund her cross-country road trip? That was CEN. The Russian fisherman who was saved from a bear attack by a Justin Bieber ringtone? CEN. The Macedonian man who chopped his own penis off after his girlfriend told him it wasn’t big enough? Also CEN.”

Buzzfeed looked at 41 ‘too good to be true’ CEN pieces, of which:

CEN denied “absolutely that it makes up false stories or fabricates quotes”. But Buzzfeed’s piece provides a go-to guide on how to check the veracity of that penis-chopping Macedonian: reverse image searches; checking names; phoning photographers and others identified in the story.

Political astroturfing and the Conservative Party

The debunking of the ‘letter from businesses’ was a different beast entirely.

Instead of one ‘big bang’ article setting out the case, there was a drip-drip of mounting suspicions. And instead of one organisation it was a distributed network of individuals who pointed out flaw after flaw in The Telegraph’s front page lead.

The initial problem was the source.

“More than 5,000 small business owners signed a letter to The Telegraph, praising the Tories’ economic plans and warning against Labour,” the article claimed (and still does).

But metadata on the letter showed that it originated from Conservative Central HQ: 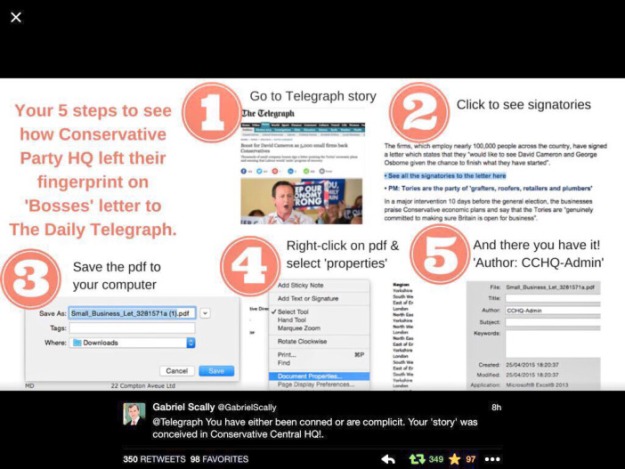 This in itself was not news – if you’re a journalist. But to readers it suggested an element of ‘astroturfing‘: creating the appearance of grassroots support and mobilisation where it is actually organised from a central organisation.

It also acted as a signal for further digging.

This is often the case in verification: it is rarely the case that one single piece of evidence instantly ‘debunks’ a story; instead it is the combination of many pieces together.

sturdyblog provides a timeline of what has happened since:

Within hours the evidence was hard to ignore. “It’s a shambles!” complained Andrew Neil on the Daily Politics show.

That BuzzFeed story appeared in my ‘most shared’ email two days running. An article about the desperation for viral content had itself ‘gone viral’.

This was no accident. Debunkers are widely known to be a particularly viral format.

Debunking myths is a key part of viral content. Image by Annalee Newitz

It’s no accident that Craig Silverman, an expert in verification, was recently appointed the founding editor of BuzzFeedCanada.

And just as the role of sub editor becomes as old-fashioned as that of ‘film processor’, ‘factchecking’ has become fashionable as a genre. It drives traffic.

Meanwhile, Google is working on a way to rank websites based on factual accuracy, not just links.

Five years ago I wrote about ‘SEO as a public service‘:

“SEO has a very valuable role in serving the public: if searches on a particular rumour shoot up, or mentions of it increase on social networks, it’s worth verifying and getting up the facts quickly.”

Now, with the rise of social media optimisation (SMO), the reverse is also true.

If you see something which is too good to be true, you may find that debunking it is worth far more in terms of traffic than fighting for attention among the dozens of outlets who merely repeat it.