Curation is a relatively new term in journalism, but the practice is as old as journalism itself. Every act of journalism is an act of curation: think of how a news report or feature selects and combines elements from a range of sources (first hand sources, background facts, first or second hand colour). Not only that: every act of publishing is, too: selecting and combining different types of content to ensure a news or content ‘mix’.

Amazon’s Jeff Bezos’ in his talk to employees at the Washington Post said: “People will buy a package … they will not pay for a story.” Previously that package was limited to what your staff produced, and wire copy. But as more content becomes digitised, it is possible to combine more content from a wider variety of sources in a range of media – and on any one of a number of platforms.

Curation is nothing new – but it is becoming harder.

I’ve identified at least three distinct types of curation (you may think of more): 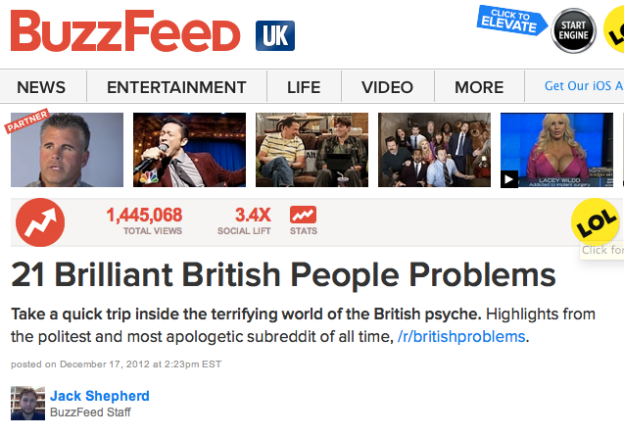 There are also a number of ways in which the journalist adds value (again, you may think of more):

As a journalist operating online, you are both reporter and publisher, able to curate content both at the article level and that of ‘publication’ – whether that’s a Twitter stream, a Tumblr blog, or a Flipboard magazine. Here are some suggestions for tools and techniques: 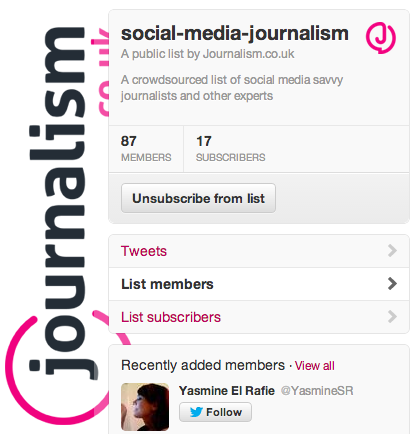 Lists are an excellent way to get started with curation. After all, you’ll be making lists anyway: lists of contacts and lists of news sources are two basic journalism processes, so why not make more out of them?

Twitter lists are a no-brainer: these are essentially curated ‘channels’ of particular users that you value for some reason. Typical themes include:

For examples check out the Telegraph’s Top 50 fashionistas on Twitter or The Guardian’s 30 most influential sustainability voices in the US, or Sports Illustrated’s Twitter 100. Large numbers aren’t essential – ten or even five is a good start, and you can always ask users to suggest more, which can spark off a useful discussion.

Aside from the fact that you are probably compiling these lists anyway, there are other reasons to make them public:

Many blogs have a ‘blogroll’ of similar sites that the publisher recommends, which site in a separate column to your main posts and look something like this:

You can search for instructions or videos on how to do this in WordPress, Blogger, Tumblr, and so on – but you should also pay some thought to how to publish part(s) of that list (a top 5, or one type) as a blog post.

The same principle applies to news (RSS) feeds that you subscribe to from the same sites. These can be monitored using an RSS reader – but some readers also provide the facility to publish the feed as a public page. This post explains how to share a folder on Netvibes, for example. What is particularly useful about sharing a list of links this way is that – in a similar way to Twitter lists – you are actually curating a live ‘channel’ rather than a static list, which means people are likely to return again and again, and share it more widely.

More broadly, you may want to consider a news roundup such as ‘Today in healthcare‘ (which doubles as a liveblog), or picking a discussion and illustrating the best of it, as BuzzFeed do regularly with articles like ‘21 Brilliant British People Problems‘ (curated from a Reddit discussion thread)

One other idea: events listings. You’ll have your own editorial calendar – why not make more of it?

If you want to make a list of multimedia material, it’s worth thinking about the easiest way for people to consume that multimedia. Do you want them to have to play each video separately, on a blog post – or do you want them to be able to play them all together, with one click? (Tip: it’s not an either/or choice – why not do both?)

YouTube playlists will allow users to do the latter – as well as allowing them to discover it on the world’s second biggest search engine (YouTube has more searches than Yahoo or Bing), and save it to their YouTube favourites or use other functions on YouTube.

CueYouTube is one tool that allows you to do this without even using YouTube itself.

For an example of curating video which first appeared in print, see The 20 online talks that could change your life, from The Guardian’s G2 supplement.

You can do the same thing with music using playlists on services like Spotify or Last.fm.

Image curation deserves separate treatment – it is perhaps the most established form of curation, spawning a host of apps and services from Instagram to Pinterest – while older image sites like Flickr have had sets and collections, groups and pools for some time now (you can also create slideshows, with a range of third party tools which will do that for you). Many also allow video. Ink361 allows users to curate Instagram photos, as do services like Storify – treated separately below.

And as we move onto stories, we need to look at mixed media.

Tools like Dipity and Meograph allow you to place curated material within a particular format: maps and timelines.

Here, for example, is a timeline of the Birmingham City of Culture bid by then-second year undergraduate student Kellie Maddox – it combines video with links to news reports and other documents (photos can also be added). The timeline can also be viewed as a map, list, or ‘flipbook’.

Meograph is more focused on mapping the story, and makes it easier to provide an audio narration. This works for stories that take place across different locations, but the geographical element can feel strained in examples like this history of Whitney Houston’s life, so use it only where movement between place is important.

Curate your own magazines with Flipboard

Flipboard is a ‘social news magazine’ – essentially an RSS reader without saying so. In that sense it is a personal curation tool – but there’s also a public functionality too: magazines.

You can create a Flipboard magazine by going to https://editor.flipboard.com. Articles can be added to any magazine by clicking on the + icon next to any article in the Flipboard app (which you can also use to create a new magazine) or by using the browser bookmarklet as explained in the FAQ when you are on an article of interest. You can customise the cover and other elements in the editor view.

Flipboard recently made it possible to view magazines on a normal desktop browser even if the user does not use Flipboard themselves. Here’s an example of a magazine curating articles on web security for journalists which I recently published.

Curation as a platform: Tumblr, Storify – and Twitter again

Results can be dragged into the main story area, and rearranged, before adding explanatory or narrative text, subheadings and a headline. Alerts can be sent to Twitter users who are quoted, and the whole can be embedded on another webpage or blog post.

It’s particularly good for curating coverage of an event from journalists, observers and participants – but is adaptable to anything you think of. I’ve used it in the past to collect a discussion that took place between multiple users across hours on Twitter into one place.

Because of this flexibility it is worth considering Storify as a platform in its own right, at least alongside your core blog for covering events, discussions and background (or any stories where material is spread across multiple public sources).

For a similarly efficient curation platform take a good look at Tumblr. Tumblr has quietly risen to become the most visited blogging service in the UK, with research suggesting that it is becoming the platform of choice (along with Instagram) for teenagers fleeing Facebook.

Like Flipboard, you can share items on Tumblr by using a bookmarklet on your browser – but you can also type original content or upload images (including sets) from your computer or phone. The curation is in the content mix over time rather than a single piece of content – so try to anticipate this from the start and pick a clear niche for your Tumblr blog’s focus – you can always have more than one.

Finally, the tool we began with – Twitter – can perform a similar function at a platform level. Sharing useful or interesting links either as a standalone service (like the automated aggregator @impatientnhs) or alongside your own observations and content can prove a successful content mix – and it’s generally easy to do so from RSS readers like Feedly and Flipboard. Linking is after all central to online journalism – so make sure you do it habitually.

UPDATE: This great Storify by Kevin Sablan goes into more detail about what curation is in a cultural context, and how journalism uses the same skills. It also links to this Mindy McAdams post on 7 types of curation in journalism.

31 thoughts on “Journalism *is* curation: tips on curation tools and techniques”