It was angry because BBC political editor Laura Kuenssberg identified the father of a sick baby who confronted the prime minister as a political activist, embedding one of his tweets in her own.

Then it was angry because people were attacking a journalist for doing her job.

Somewhere between the heated accusations and counter-accusations, however, there was an important lesson to be learned — and a reasonable discussion to be had.

It is a lesson about understanding very different online cultures, about new journalistic practices, and an emerging  dimension of journalistic ethics that few reporters have truly gotten to grips with. END_OF_DOCUMENT_TOKEN_TO_BE_REPLACED 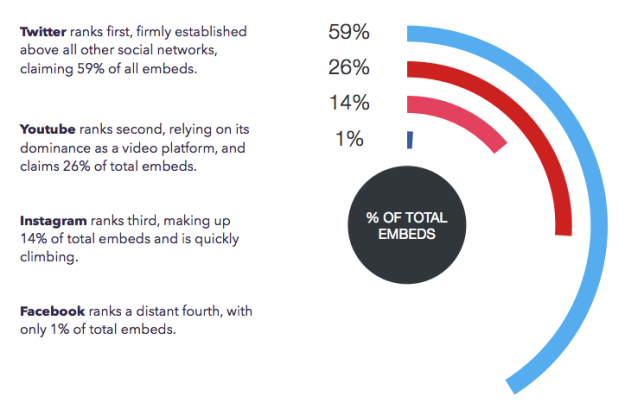 Image: The State of Social Embeds

Every web journalist knows that linking is one of the most fundamental qualities of online journalism: a web article without links is like TV without moving images.

But in the last couple of years something else has become equally important: I’m talking about the embed.

Two years ago I noted how publishers were finally getting to grips with linking – and how embedding was a major factor in that.

As material from social media has become increasingly central to news stories, content management systems have finally been adapted to allow journalists to embed the very elements they were talking about: that controversial tweet; the Facebook reaction; the damning Instagram snap; the viral YouTube video.

Now, one report has noted that almost a quarter of 1 million news articles in a study included embedded media. END_OF_DOCUMENT_TOKEN_TO_BE_REPLACED

If you’re cross-posting material online, being paid to include links in a post, or linking to material which raises ethical challenges around taste and decency, there are two snippets of HTML you should be aware of. Here’s a quick guide…

It’s not uncommon to post a copy of your work on your personal blog, or for someone to ask if they can republish on their site something you have written on yours. END_OF_DOCUMENT_TOKEN_TO_BE_REPLACED

It’s not unusual for news organisations to publish full transcripts of political speeches – but The Mirror have done something simple with Hilary Benn’s speech on a vote on air strikes in Syria which seems like such a no-brainer you wonder why everyone doesn’t do it.

It is simply this: they have added links.

In doing so they transform a linear, text-only experience which assumes certain knowledge on the part of the reader (actually, listener) into something journalistic: reporting that adds context and illustration.

Here are some of the roles that those links perform:

This last point bears some elaboration: too often journalists assume that their online readers are as familiar with the publication as print readers used to be.

But online readers are more diverse and read much more widely than a typical print readership: there is no guarantee that a typical user landing on a page on your site has ever read anything else on it; and it’s even less likely that they read everything.

Online, it’s more likely they checked the BBC site than the Mirror.

There’s also a point to make about international audiences: what may have dominated the news in Europe for days may have been missed by readers elsewhere in the world. Never assume your audience knows what you do.

The ‘Carnage in Paris’ link isn’t just about driving internal traffic: it is also about SEO. Internal linking helps Google to find and understand content better.

For the same reason the word ‘Daesh‘ is linked not once but every time it is mentioned: the Mirror is trying to strengthen the link (in Google’s terms, the relevance) between that word and their post explaining what Daesh is and why the term is being used instead of ISIS or Isil.

Unfortunately, this also means that other opportunities to serve the reader through links can be missed.

The speech, for example, mentions a United Nations resolution, but there is no link to that. It mentions debate about the ‘70,000 troops’ figure, but does not link to any factchecking on that figure. Both of these might involve linking outside the site, and sadly this isn’t a priority.

This is something that needs to change in news organisations. In some cases, external linking is discouraged in the mistaken belief that it will ‘drive traffic elsewhere’. In fact, there is evidence that  it leads people to return to your site (it’s even been linked to evidence of digital progress). This is like a TV producer arguing that they should not film on location in case people decide to go there instead of watching TV.

The fundamental role of linking

Links are as fundamental to online journalism as pictures are to TV, and yet we are not there yet: still you will find articles published online with no links at all.

The Mirror’s approach is a great example of this. To see why, you only have to imagine if television had no footage of Benn speaking (as would have been the case 30 years ago). In that situation TV would not simply run audio on a black screen: they would add pictures to illustrate what we were hearing. Likewise, if radio only had a transcript they would find aural ways of bringing that to life and adding context.

Links, of course, can do both. And embedding – essentially a form of linking – can do. In fact, that’s the approach the Express adopt on their transcript, alongside images and a gallery. And it’s also useful to note that the Mirror still embed the video of the speech at the top of their piece, even though they have devoted a separate post to the video alone. 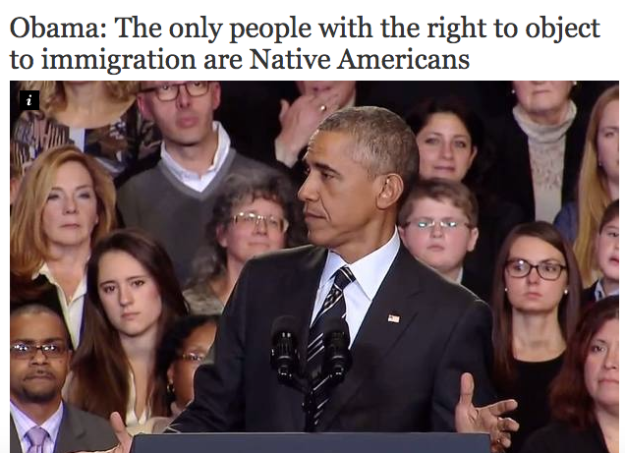 Something remarkable happened this year. Something I’ve been waiting for for a long time.

News reports on the web finally started to look more and more like… well, web-native articles.

Not print articles online, not broadcast journalism online, but online journalism, online. I’m talking about journalism which isn’t just text: whether that means linking and embedding or mixing text with images, video or audio.

So what changed in 2014? Here are three factors I’ve noticed growing in influence over the last 12 months. END_OF_DOCUMENT_TOKEN_TO_BE_REPLACED

Most research on news consumption annoys me. Most research on news consumption – like Pew’s State of the News Media – relies on surveys of people self-reporting how they consume news. But surveys can only answer the questions that they ask. And as any journalist with a decent bullshit detector should know: the problem is people misremember, people forget, and people lie.

The most interesting news consumption research uses ethnography: this involves watching people and measuring what they actually do – not what they say they do. To this end AP’s 2008 report A New Model for News is still one of the most insightful pieces of research into news consumption you’ll ever read – because it picks out details like the role that email and desktop widgets play, or the reasons why people check the news in the first place (they’re bored at work, for example).

Now six years on two Dutch researchers have published a paper summarising various pieces of ethnographic and interview-based consumption research (£) over the last decade – providing some genuine insights into just how varied news ‘consumption’ actually is.

Irene Costera Meijer and Tim Groot Kormelink‘s focus is not on what medium people use, or when they use it, but rather on how engaged people are with the news.

To do this they have identified 16 different news consumption practices which they give the following very specific names:

Below is my attempt to summarise those activities, why they’re important for journalists and publishers, and the key issues they raise for the way that we publish. END_OF_DOCUMENT_TOKEN_TO_BE_REPLACED

Image from MHP The Ident Zone - click to see in context

The BBC’s social media lead for the English Regions Robin Morley has invited requests from “reputable hyperlocal websites” who want links to their stories included in the BBC’s regional news websites. END_OF_DOCUMENT_TOKEN_TO_BE_REPLACED