Here is a checklist covering 8 mistakes made repeatedly by first-time web writers, which I’ve put together for one of my classes. The idea is simple: if you answer ‘No’ to any of these, carry on to the accompanying guidance that follows underneath.

Checklist: are you doing the following?

Solving it: 1. The first par

When you write the first draft of an article some people begin with a ‘warming up’ paragraph. Here’s a classic example:

“On Tuesday 14th February 2012, we went to the office of Bob Jones, for a brief discussion with a colleague…”

Ask yourself this: does your first par tell us anything new? Does it grab the reader and promise more? If it does neither then it needs rewriting.

Here are some examples of cutting to the key facts:

“A vice chancellor who sparked a political storm over his views on the social mix of degree students has been appointed England’s new university access tsar.”

Or, when your focus is an interview or guest post:

“Attempts to block the appointment of the new head of Offa, and changes to the tuition-fee regime, make higher education policy resemble an Alice-in-Wonderland world, says Mike Baker”

“A new London park, 70,000 volunteers, a home crowd spurring on British athletes… Sebastian Coe tells Emma Brockes why the 2012 Olympics are worth the money”

You can even start with the most colourful and attention-grabbing information gained in the interview, like so:

“If in February 1941 the commander of the German battlecruiser Gneisenau had decided to steam off and leave Peter Coe to his fate in an open lifeboat in the North Atlantic, the world might never have taken delivery of his son, Sebastian.”

In short, if your paragraph is warming up, chop it out entirely – and look at each paragraph to see which one is the best to start with. If your article is trying to cover more than one basic angle, consider splitting it into two separate, shorter, posts.

Don’t tell us how you got here

Another common mistake is to tell us about how you got to this point:

“At first I had this idea, and then X happened, and I realised Y, so I decided to write about what I’m about to write.”

Remember the reader doesn’t care how you got to this point – unless it’s a stunning story in itself. So cut to the chase instead:

Solving it: 2. and 3. Linking to your sources – and linking phrases, not URLs

Any mention of any information that you haven’t gathered in its raw form yourself should include a link to the source. For example:

“According to the Higher Education Funding Council for England’s official website, they define “non-completion” by…”

Should be linked to the source material as follows:

“According to the Higher Education Funding Council for England, they define “non-completion” by…”

Here are some more examples:

Online text is easier to read the more that it is broken up. Get to know the formatting panel just above the space where you write your post (shown below). 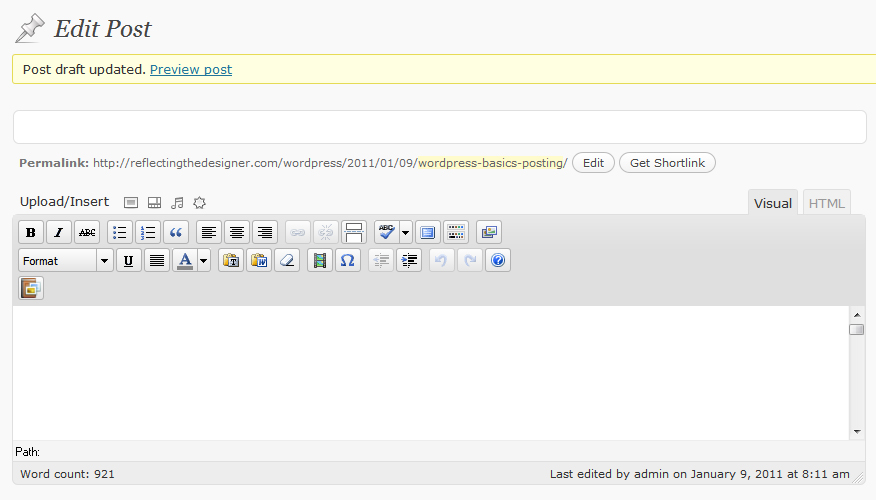 Solving it: 5. Splitting pars after every point is made

“Firms and charities are to be invited to bid for a payment-by-results scheme to try to get “Neet” teenagers into work or training, in a project launched by Deputy Prime Minister Nick Clegg. The £126m scheme is aimed at 55,000 teenagers in England with poor qualifications who are currently not in education, employment or training. Mr Clegg says it is about “getting them out of the living room, away from the telly and into the world of work”. Labour says it won’t help the majority.”

“Firms and charities are to be invited to bid for a payment-by-results scheme to try to get “Neet” teenagers into work or training, in a project launched by Deputy Prime Minister Nick Clegg.

“The £126m scheme is aimed at 55,000 teenagers in England with poor qualifications who are currently not in education, employment or training.

“Mr Clegg says it is about “getting them out of the living room, away from the telly and into the world of work”.

That’s from the BBC, an exemplar of good web writing.

Try to keep pars short, and start new ones whenever a new point is being made.

Solving it: 6. and 7. Headlines and subheadings – keep them specific and literal

Imagine what your headline looks like in the middle of a bunch of search results, or on Twitter. Imagine what it looks like to someone who has never read your site before, doesn’t know you, or your culture, jokes and phrases.

Here’s an example of a bad headline:

Useful contacts for everyone

Again, imagine this in search engine results. Twitter contacts in what field? They’re clearly not for “everyone” but something specific – in this case, the Olympics, so this is much better:

Here’s one that’s even worse:

This tells us nothing unless we are already following the blog – and even then, it doesn’t tell us whether this is interesting or merely functional. Try this instead:

Update: unemployment up; Grayling’s 3 reasons; we want your questions!

Don’t be afraid of long headlines – look at how the Daily Mail use them (extremely successfully) on their website.

Try and use key words and phrases in your headline so that search engines understand what they’re about. This, for example, is bad:

This is much better:

…Because what will people be searching for? Rooney perhaps; Champions League; Roma. They might even be searching for “hat-trick” or “video”. Think of how people search, and write your headline to answer that (assuming your content does too).

The same rules apply to subheadings. These serve two purposes: to break up your text so people can find their place in them more easily; and to help search engines understand your content.

They should therefore be mini-headlines, with keywords relevant to the pars that follow.

One of the key ways in which online journalism differs from print or broadcast is that you are not dealing with an audience: you are dealing with potential collaborators and sources who can improve your journalism with a single comment.

The traditional way of ending articles, then – implying that the story is finished and the reader can move on to what’s on page 5 – does not apply.

Instead you should try to leave room for the user to contribute in some way. Here are some examples: