James Gaines has put together an impressively elegant flowchart for data stories which I wanted to share here. END_OF_DOCUMENT_TOKEN_TO_BE_REPLACED

A screenshot of the BirminghamEastside WhatsApp channel

During this year’s general and local elections a collection of my Birmingham City University students used WhatsApp to publish regular updates throughout the two days of voting. Frankly… they nailed it. In the process they learned a lot, so I thought I’d share some of the things that came up throughout the process – as well as the experiences of the person responsible for the Mirror‘s political WhatsApp account in the week leading up to the election. END_OF_DOCUMENT_TOKEN_TO_BE_REPLACED

Trinity Mirror are closing Ampp3d and UsVsTh3m. Here are just 9 of their best moments, in reverse order. Are there any you think should be here too?

9. More people may have died building venues for Qatar 2022 than will play in the 2014 World Cup

Mary Hamilton describes this as “the single best interactive I have ever seen for mobile.” At the time I wrote a whole post about it: This simple piece of visualisation will have you rethinking what you know about impact and mobile: END_OF_DOCUMENT_TOKEN_TO_BE_REPLACED

Really sad that Mirror is shutting @UsVsTh3m @ampp3d & @MirrorRowZed. They were the only things on their site I read: http://t.co/JTgBafmMVh

It is perhaps a sign of the success of Trinity Mirror’s web-savvy projects Ampp3d, UsVsTh3m and Row Zed that reports of their closure have generated such strong reactions from journalists across a range of titles.

UsVsTh3m launched in early 2013; Ampp3d towards the end of the same year. The launches themselves represented a fresh approach to mainstream publishing online: standalone teams free to innovate without the baggage of print costs, systems and cultures.

The projects were initially given 3 months to prove their worth as separate projects but ended up becoming part of the Mirror site and sticking around for 2 years.

On those grounds alone UsVsTh3m, Ampp3d – and Row Zed in 2014 – have been a success. They achieved what they set out to do, and more.

Good luck to & sympathy for folks at @UsVsTh3m & @Ampp3d. v much admired the latter's data output and shouted at the former's games

But they have also had a massive influence on the wider industry – an influence which may have contributed to their closure. END_OF_DOCUMENT_TOKEN_TO_BE_REPLACED

In a guest post for OJB, Ion Mates interviews Tom Levine and Roman Heindorff about the role of audio in data journalism.

Audiolisation (sometimes called ‘auralization‘ or ‘sonification’) is the process of turning complex data to sound.

Instead of using graphics and bar charts, one can represent the contents of a spreadsheet by assigning sounds to different kinds of data.

In the above example, the activity of newsrooms is represented by verses, phrases and different rhythms. The author is Thomas Levine.

Beginning to represent data as audio

Tom started playing with computers from an early age. His main interest was to design things towards them being easier to use.

END_OF_DOCUMENT_TOKEN_TO_BE_REPLACED 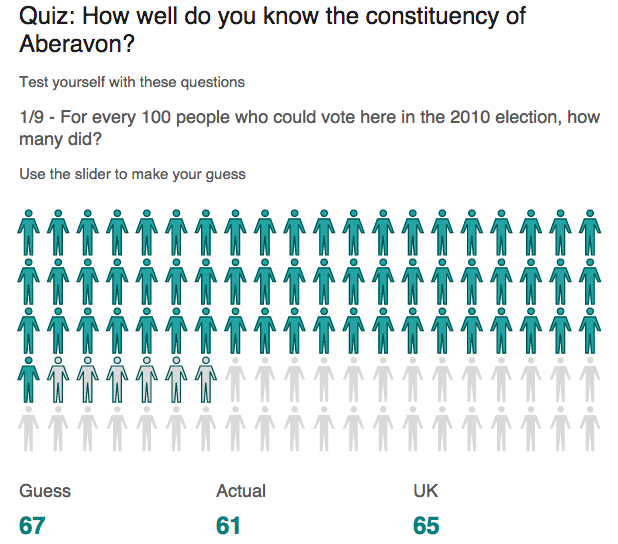 This has been the election when the geeks came in from the cold. There may be no Nate Silver-style poster boy for the genre this side of the pond – but instead, I believe we’ve finally seen the culmination of a decade of civic hacking outside the newsroom. And if anyone deserves credit for that, it is not the Guardian or the Telegraph, but MySociety, Tweetminster, and Democracy Club.

Looking back at my review of online election reporting in 2010 it’s striking how much has changed. Back then data journalism’s contribution was all about interactive presentation of results, but little else.

In the time between that election and this one, however, two things have changed within the news industry: firstly, a more code-literate workforce, including dedicated data project teams; and secondly, the rise of mobile, social media-driven consumption and, as part of that, visual journalism. END_OF_DOCUMENT_TOKEN_TO_BE_REPLACED

Who would be in your MP fantasy team? Fantasy Frontbench (FF) is a voting advice app which has been exploring this concept for the last few weeks, in the lead up to the General Election.

Using the tool, users can build a team of 22 politicians based on features such as gender or the university where they studied, but also how he or she voted in Parliament on particular issues.

“I felt as so many people were already familiar with the concept of a ‘dream team’ that it had a real chance of capturing the imagination of people who are not generally interested in politics,” says Project Manager Matthew Smith.

The app not only includes MPs elected in 2010, but also those politicians with high profiles during this campaign, like Natalie Bennett (Green Party candidate) or Nigel Farage (UK Independence Party).

There are also politicians from the smaller parties who have a chance to win their seats.

Smith works as learning technologist at University College London, where he is exploring ways in which information can be presented “in a more interesting and engaging way.”

Infographic by Agustin Palacio. Click for an interactive version.

FF claims to have had 15,000 unique visitors, with the average time spent on the site being roughly 2 minutes.

The 8 volunteer members who run the non-profit project say they are happy with the figures but that a large audience is not their main purpose.

“In my view, even if the site had only helped one person raise their political understanding, the project would have been worthwhile.”

Brighton Pavilion, Bristol West and Norwich South are the seats where the #Greens are projected to poll over 20%. pic.twitter.com/jaNH1q1GBd

According to Smith, this election campaign has been “the first where Voting Advice Applications (VAAs) have reached a level of maturity where their use can no longer be said to be insignificant.”

In fact, FF comes from around 3 data sources which are open to everybody, through which it is possible to get information related to different candidates and issues. Here are those 3, plus some others Smith recommends:

“The way they have visualised data ranging from share of the vote and past MPs, to forecasts and party spending is truly excellent. A perfect example of the adage ‘simple but effective’.”

Are you a hyperlocal covering this year’s general and local elections? If so, then Online Journalism Blog would love to hear from you!

In particular, we’d love to hear what you’re doing and how it is going, as well as if you’ve encountered any problems/challenges. Do leave comments below or contact us via Twitter.

We’ll then feature links to your coverage in a future post, as part of our wider efforts to showcase the great work being done by this sector, as well as where local publishers might need more help in terms of access to candidates, accreditation etc.

What do you do when you’ve been using a hashtag for some time and another one comes along with the potential to be more popular? Do you jump on board – or do you stick with the hashtag you’ve built up? How do you measure the best hashtag to use for your work?

That’s the question that a team of my undergraduate journalism students at Birmingham City University faced last month. And here’s how they addressed it.

First, some background: in February this year the students launched their election coverage under the hashtag #brumvote.

The hashtag worked well – it took in everything from BuzzFeed-style listicles to hustings liveblogs and data-driven analysis of local MPs’ expenses and voting patterns.

Then last month a similar hashtag appeared: the BBC launched their own youth-targeting election project, with the hashtag #brumvotes.

At this point the students faced 3 choices:

Changing hashtag would involve changing dozens of posts from previous coverage, but would the clout of the BBC mean missing out on a potentially more successful hashtag? END_OF_DOCUMENT_TOKEN_TO_BE_REPLACED 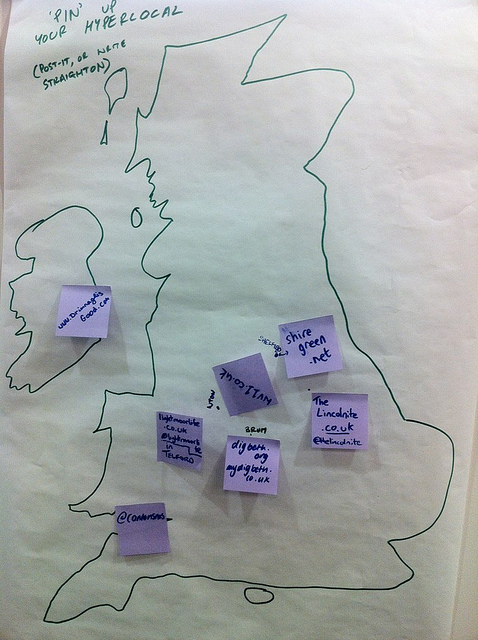 In a guest post, Damian Radcliffe says that hyperlocal sites are being held back by regional newspaper snobbery, while he gives 10 reasons why hyperlocal should be recognised as a valuable part of local media.

With decade-old sites like the London SE1 community website and OnTheWight being joined by newcomers such as East Grinstead Online and Alt Reading, the hyperlocal sector is an increasingly established part of our local media ecology.

Research suggests that there are 408 active hyperlocal sites in the UK – compared to 1,045 local and regional newspapers (2011 Newspaper Society figures cited by the NUJ) – and hyperlocal media has attracted attention from funders, policy makers and researchers in recent years.

Despite this recognition, there remains a glass ceiling for the sector, particularly in terms of relationships with mainstream media. END_OF_DOCUMENT_TOKEN_TO_BE_REPLACED