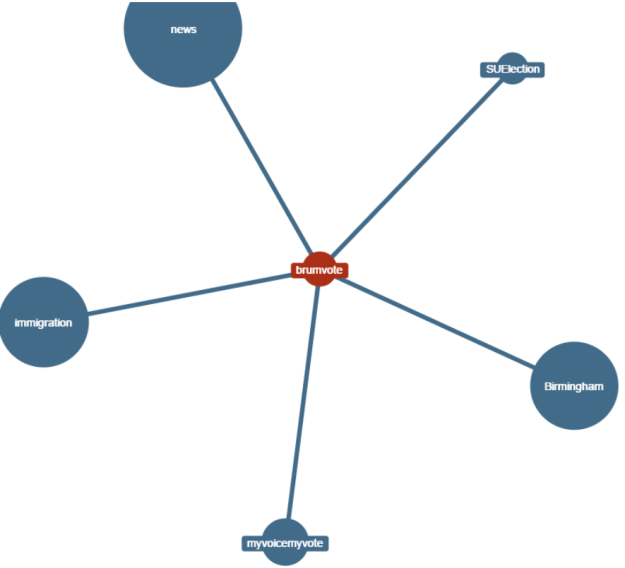 What do you do when you’ve been using a hashtag for some time and another one comes along with the potential to be more popular? Do you jump on board – or do you stick with the hashtag you’ve built up? How do you measure the best hashtag to use for your work?

That’s the question that a team of my undergraduate journalism students at Birmingham City University faced last month. And here’s how they addressed it.

First, some background: in February this year the students launched their election coverage under the hashtag #brumvote.

The hashtag worked well – it took in everything from BuzzFeed-style listicles to hustings liveblogs and data-driven analysis of local MPs’ expenses and voting patterns.

Then last month a similar hashtag appeared: the BBC launched their own youth-targeting election project, with the hashtag #brumvotes.

At this point the students faced 3 choices:

Changing hashtag would involve changing dozens of posts from previous coverage, but would the clout of the BBC mean missing out on a potentially more successful hashtag? END_OF_DOCUMENT_TOKEN_TO_BE_REPLACED 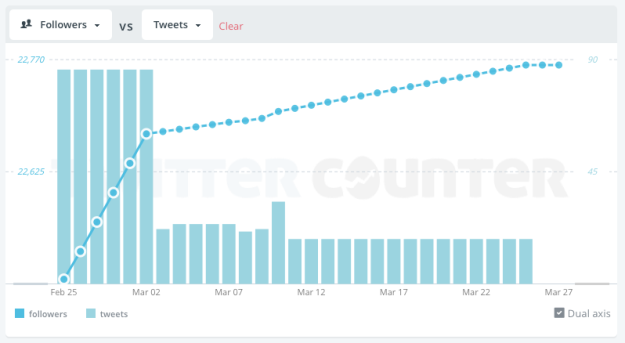 Last year I decided to require my students to submit analytics as part of all their online journalism work. One of the tools that I recommended was Twittercounter.

The free version of Twittercounter does something very simple: it shows you a chart comparing two of three metrics: your followers, your volume of tweets, or the number of people you are following.

It’s not completely accurate, but its simplicity does something very important: it focuses your attention on whether your use of social media has any impact, on one metric at least: the size of your audience.

Of course followers is only one metric – I’ll write in a future post about other metrics and other ways of measuring those – but the ease with which Twittercounter works makes it as good a place as any for aspiring students to begin exploring the importance of measurement in modern journalism.

By way of example, here are 11 charts which show how a simple tool like Twittercounter can illustrate what you’re going right as a journalist – and where you can improve. END_OF_DOCUMENT_TOKEN_TO_BE_REPLACED 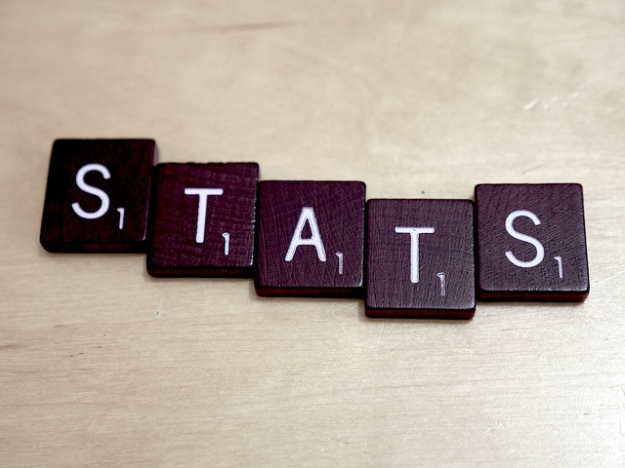 I am not a great ‘numbers’ person, but even I was surprised by the attitudes that journalism lecturers at the Statistics in Journalism conference reported in their students.

‘I don’t do numbers’ and ‘I hate maths’ were depressingly common expressions, perhaps unsurprisingly. People wanting to study journalism enjoy the use of language and rarely expect that numbers will be vital to the stories they are telling.

So those responsible for journalism education have a tricky task. A bit like providing a sweet covering to a nasty-tasting tablet, it was said that lecturers need to be adept at finding ingenious ways to teach a practical and relevant use of numbers without ever mentioning the M (maths) or S (statistics) words. END_OF_DOCUMENT_TOKEN_TO_BE_REPLACED

I’ve been working recently with the Birmingham Mail to launch Behind The Numbers, a new datablog project with Birmingham City University supported by Help Me Investigate. I’m told that it is probably the UK’s first regional newspaper datablog, although whether that’s a meaningful claim is debatable*.

The first story generated by the project – what is the worst time to be seen at A&E – was published in the newspaper a week ago. But it’s what happens next that’s going to be interesting. END_OF_DOCUMENT_TOKEN_TO_BE_REPLACED

After a short summer break, our Hyperlocal Voices series returns.  In this issue we visit the tiny island South Atlantic island of Saint Helena. Perhaps best known for being the home of an exiled Napoleon, it is frequently described as one of the world’s most isolated islands. At just 10 x 5 miles, and with a population of 4,255 people, Simon Pipe’s St Helena Online, offered Damian Radcliffe an insight into a very different type of hyperlocal site. END_OF_DOCUMENT_TOKEN_TO_BE_REPLACED

In January 2012 I was facing an old problem: as I prepared to teach a new undergraduate online journalism class, I wanted to find a way to encourage students to connect with wider networks in the area they were reporting on.

Networks have always been important to journalists, but in a networked age they are more important than ever. The days of starting your contacts book with names and numbers from formal organisations listed in the local phonebook are gone. Now those are instantly available online – but more importantly, there are informal groups and expert individuals accessible too. And they’re publishing for each other.

Because of this, and because of reduced resources, the news industry is increasingly working with these networks to pursue, produce and distribute stories, from Paul Lewis’s investigative work at The Guardian to Neal Mann’s field reporting for Sky, the Farmers’ Weekly team’s coverage of foot and mouth, and Andy Carvin’s coverage of the Arab Spring at NPR.

How could I get students to do this? By rewriting the class entirely.

END_OF_DOCUMENT_TOKEN_TO_BE_REPLACED

Late last year I was asked to put together some presentations giving advice on verifying information, finding people and stories online, ethics, and news values. These were translated by Anas Qtiesh into Arabic as part of CheckDesk, a project to support Middle East citizen journalists created by Meedan at Birmingham City University.

The materials are collected at ArabCitizenMedia.org. I’ve linked to each presentation above.

A new community for hyperlocal bloggers has been launched: Hyperlocal Alliance is “intended for grass-roots hyperlocal site owners, [and] is invite only (at the moment)”.

The Journalism Foundation has published a resource aimed at hyperlocal publishers – How To Build a Local Site (PDF) – including a chapter taken from the Online Journalism Blog (a rather curious choice, but there you go) and a link to Help Me Investigate in the Further Reading section.

NESTA has published Here And Now, its report (PDF) into the UK hyperlocal scene (shown above).

It’s also offering up to £50,000 in funding for hyperlocal projects.

And Birmingham City University (where I run the MA in Online Journalism) are recruiting a Research Assistant for a research project on hyperlocal publishing.

See comments for a 6th…

The site is being run by a colleague of mine from Birmingham City University, Jennifer Jones, as part of a project we’re working on which sees students at BCU and other universities connecting to wider online networks in investigating Olympics-related questions.

Jennifer knows those networks particularly well as the coordinator for #media2012, web editor and staff editor for Culture @ the Olympics. She is also writing her PhD on Social Media, Activism and the Olympic Games at the University of the West of Scotland.

If you want to contribute to the site or related investigations, get in touch in the comments or via Olympics@helpmeinvestigate.com 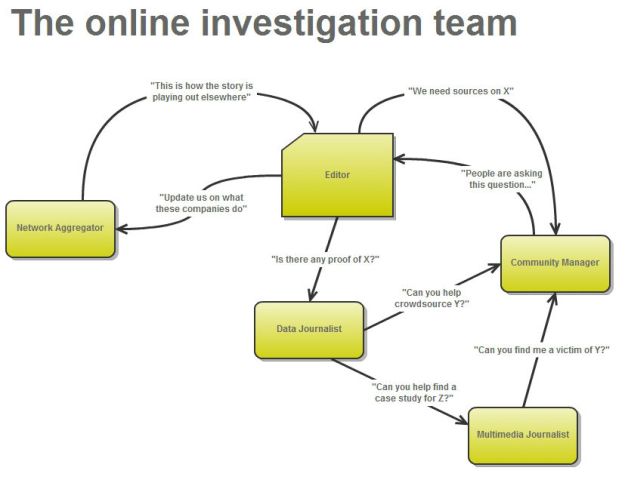 In almost a decade of teaching online journalism I repeatedly come up against the same two problems:

Until now I’ve addressed these problems largely through teaching and individual feedback. But for the next 3 months I’ll be trying a new way of organising students that hopes to address those two problems. As always, I thought I’d share it here to see what you think.

Roles in a team: moving from churnalism to depth

Here’s what I’m trying (for context: this is on an undergraduate module at Birmingham City University):

Students are allocated one of 5 roles within a group, investigating a particular public interest question. They investigate that for 6 weeks, at which point they are rotated to a different role and a new investigation (I’m weighing up whether to have some sort of job interview at that point).

The group format allows – I hope – for something interesting to happen: students are not under pressure to deliver ‘stories’, but instead blog about their investigation, as explained below. They are still learning newsgathering techniques, and production techniques, but the team structure makes these explicitly different to those that they would learn elsewhere.

The hope is that it will be much more difficult for them to just transfer print-style stories online, or to reach for he-said/she-said sources to fill the space between ads. With only one story to focus on, students should be forced to engage more, to do deeper and deeper into an issue, and to be more creative in how they communicate what they find out.

Only one member of the team is primarily concerned with the story, and that is the editor:

It is the editor’s role to identify what exactly the story is that the team is pursuing, and plan how the resources of the team should be best employed in pursuing that. It will help if they form the story as a hypothesis to be tested by the team gathering evidence – following Mark Lee Hunter’s story based inquiry method (PDF).

Qualities needed and developed by the editor include:

This post on Poynter is a good introduction to the personal skills needed for the role.

The community manager’s focus is on the communities affected by the story being pursued. They should be engaging regularly with those communities – contributing to forums, having conversations with members on Twitter; following updates on Facebook; attending real world events; commenting on blogs or photo/video sharing sites, and so on.

Qualities needed and developed by the community manager include:

6 steps to get started in community management can be found in this follow-up post.

While the community manager is focused on people, the data journalist is focused on documentation: datasets, reports, documents, regulations, and anything that frames the story being pursued.

Qualities needed and developed by the data journalist include:

Here’s a step by step on how to get started as a data journalist.

The multimedia journalist is focused on the sights, sounds and people that bring a story to life. In an investigation, these will typically be the ‘victims’ and the ‘targets’.

They will film interviews with case studies; organise podcasts where various parties play the story out; collect galleries of images to illustrate the reality behind the words.

Qualities needed and developed by the MMJ include:

Here’s a guide to getting started in the Multimedia Reporter role.

(This was called Network Aggregator in an earlier version of this post) The CJ is the person who keeps the site ticking over while the rest of the team is working on the bigger story.

This is the least demanding of the roles, so they should also be available to support other members of the team when required, following up minor leads on related stories. They should not be ‘just linking’, but getting original stories too, particularly by ‘joining the dots’ on information coming in.

Qualities needed and developed by the CJ include:

There’s a post on 7 ways to follow a field as a network aggregator (or any other journalist) on Help Me Investigate.

And here’s a post on ‘How to be a curation editor‘.

Examples of network aggregation in action:

Publish regular pieces that come together in a larger story

If this works, I’m hoping students will produce different types of content on their way to that ‘big story’, as follows:

You can read more on the expectations of each role in this document. And there’s a diagram indicating how group members might interact at the top of this article.

What will make the difference is how disciplined the editor is in ensuring that their team keeps moving towards the ultimate aim, and that they can combine the different parts into a significant whole.

UPDATE: A commenter has asked about the end result. Here’s how it’s explained to students:

“At an identified point, the Editor will need to organise his or her team to bring those ingredients into that bigger story – and it may be told in different ways, for example:

If you’ve any suggestions or experiences on how this might work better, I’d very much welcome them.