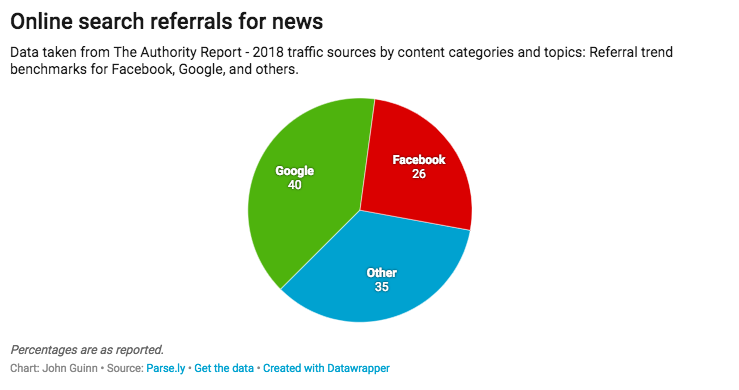 When it comes to news websites’ referral traffic, Google beats Facebook hands-down, with the search giant accounting for 40% compared to Facebook’s 26%. And yet hyperlocals, says publisher John Guinn, are making it harder for people to find them by not making the most of four simple SEO settings. In a guest post for OJB, John explains what those settings are — and how hyperlocal sites can use them to improve their SEO. END_OF_DOCUMENT_TOKEN_TO_BE_REPLACED

In a guest post Jane Haynes speaks to investigative journalist Peter Geoghegan of the award-winning news site The Ferret about data, contacts and “nosing up the trousers of power”.

When the Scottish Government announced last month that it was banning fracking, it was a moment to savour for a group of journalists from an independent news site in the heart of the country.

The team from investigative cooperative The Ferret had been the first news organisation to reveal plans by nine energy companies to bid for licences to extract shale gas from central Scotland.

Using a combination of contact-led information and FOI requests, they uncovered the extent of the ambitions to dig deep into Scottish soil.

It was part of a steady flow of fracking stories from the Ferret team, ensuring those involved in making decisions were in no doubt of their responsibilities and recognised that every step would be scrutinised. END_OF_DOCUMENT_TOKEN_TO_BE_REPLACED

This is the first piece of content the BBC has shared under a new partnership with the News Media Association https://t.co/i8lq04wmdO

The BBC’s Local News Partnership — a project to support local and hyperlocal media through access to extra content and staff — has just opened up applications to its second stage.

The ‘Section Two’ stage is focused on contracts for Local Democracy Reporters — but applicants can also now just complete the ‘Section One’ application to receive BBC content. END_OF_DOCUMENT_TOKEN_TO_BE_REPLACED

A council is warning it will reduce access to journalists if they aren’t regulated or don’t offer a right of reply. Andrew Brightwell asks if this marks a turning point for journalism’s relationship with local councils.

Two weeks ago, Thurrock Council approved its communications strategy, setting out how it will talk to residents and media.

Communications strategies are approved every day by councils without controversy, but Thurrock’s has provoked accusations that the authority wants to play ‘judge and jury’ to its coverage in the media, as YourThurrock first reported.

What does Thurrock Council’s strategy say?

Most of the document — which you can read here (PDF) — is innocuous, but a section on media liaison says it will only consider journalists’ organisations as ‘media’ if they are signed up to a press or broadcast regulator. END_OF_DOCUMENT_TOKEN_TO_BE_REPLACED

Some time ago the BBC announced that it would be supporting local journalism by paying “local democracy reporters” (LDRs) to cover councils, courts and public services. The resulting stories would be supplied to local and hyperlocal news organisations.

Last month at an event in Birmingham more details were unveiled — and they didn’t make promising reading for hyperlocal publishers, as one of my students, Jane Haynes, reported: END_OF_DOCUMENT_TOKEN_TO_BE_REPLACED

In the history chapter of the Online Journalism Handbook you will find a timeline of key events in web journalism. While working on the forthcoming second edition I recently revisited and updated the timeline. Below are the 41 key events I have settled on — but have I missed any? Let me know what you think. END_OF_DOCUMENT_TOKEN_TO_BE_REPLACED

The days when newspapers could rely on ad revenue are gone. Image by Dean (leu)

Every so often a journalism student sends me questions for an assignment. I publish the answers here in the FAQ series. The latest set comes from a student in Australia writing for Upstart magazine at La Trobe University, and focuses on the local press.

1. Is the reader not worth as much on the internet?

Readers have always been worth different amounts in different contexts. It’s not that the reader is ‘not worth as much on the internet’, but that most readers on most websites are worth less. END_OF_DOCUMENT_TOKEN_TO_BE_REPLACED

On August 17-18 the Centre for Investigative Journalism is organising some free training workshops for independent community based journalism outlets in Birmingham (and yes, I’ll be helping too).

Through investigative training; advice and guidance in journalistic practice; and support in building regional networks and sustainable business models we aim to revive local and community based reporting to address the democratic deficit left by a decades-long decline in budgets, staff and overall plurality across the UK local media industry.

The new programme hopes to help independent publishers improve their ability to gain access to information and investigate issues affecting their communities, and to share their findings in the public interest.

Some of the reasons behind the training include:

Birmingham isn’t the only region this will be happening, but it will be the first. If you are interested in being involved, please contact us at tom@tcij.org.

Due to the remit of this project CIJ are only able to provide training to journalists working with a specific community/regional focus on a part-time or voluntary basis. The project has been funded by the Joseph Rowntree Charitable Trust

Civic engagement? Most readers spent more than 30 minutes on the liveblog

On Monday I was involved in a fascinating experiment in civic engagement: 10 hyperlocal blogs all agreed to embed a liveblog of a hustings which would give inhabitants of the largest local authority in Europe an insight into the next council leader.

The liveblog itself was to be maintained by student contributors to the Birmingham Eastside news site. The decision to offer it out to hyperlocal sites across the city seemed obvious – so why aren’t publishers doing this regularly? END_OF_DOCUMENT_TOKEN_TO_BE_REPLACED

The DCMS pubished this image to clarify the definition of “a relevant published” under proposals published in early 2013.

Nick Booth left a Press Recognition Panel consultation under the impression that non profit hyperlocals were going to be exposed by the new regulation system. Then legal experts suggested he’d got it wrong. So which is it? In a special post cross-published from Podnosh, Nick tries to tease out a complex law and ask: ‘when someone sues now, who pays?’.

Last week I spent a couple of hours at a consultation in Birmingham run by the Press Recognition Panel, which is the regulator set up to oversee the creation of (a?) new press regulator(s) following the Leveson Inquiry and the Royal Charter. (I know this has already got a bit “what?”, but stick with me.)

I was there because I’m interested in what it means for hyperlocal websites (which we have helped people set up over a number of years). Especially the implications for those run for the love of their community,  sites like B31voices or WV11 –  not run for the money. Talk About Local has already questioned whether hyperlocals fall within Leveson and I wanted to be clear one way or the other…

So this is how my thinking has evolved…. if you find an asterix next to an assertion I’m not 100% sure this is right. END_OF_DOCUMENT_TOKEN_TO_BE_REPLACED