Who would be in your MP fantasy team? Fantasy Frontbench (FF) is a voting advice app which has been exploring this concept for the last few weeks, in the lead up to the General Election.

Using the tool, users can build a team of 22 politicians based on features such as gender or the university where they studied, but also how he or she voted in Parliament on particular issues.

“I felt as so many people were already familiar with the concept of a ‘dream team’ that it had a real chance of capturing the imagination of people who are not generally interested in politics,” says Project Manager Matthew Smith.

The app not only includes MPs elected in 2010, but also those politicians with high profiles during this campaign, like Natalie Bennett (Green Party candidate) or Nigel Farage (UK Independence Party).

There are also politicians from the smaller parties who have a chance to win their seats.

Smith works as learning technologist at University College London, where he is exploring ways in which information can be presented “in a more interesting and engaging way.” 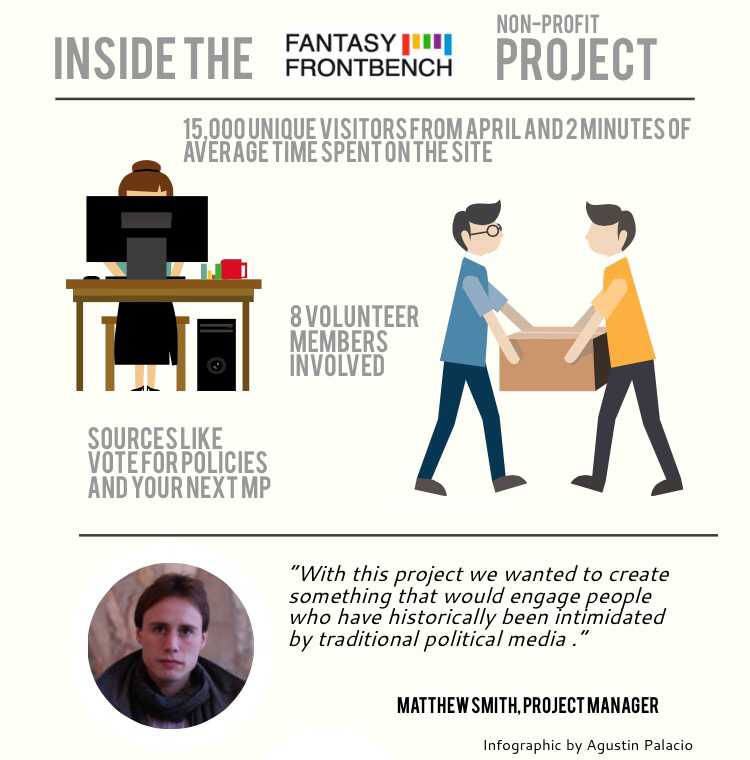 Infographic by Agustin Palacio. Click for an interactive version.

FF claims to have had 15,000 unique visitors, with the average time spent on the site being roughly 2 minutes.

The 8 volunteer members who run the non-profit project say they are happy with the figures but that a large audience is not their main purpose.

“In my view, even if the site had only helped one person raise their political understanding, the project would have been worthwhile.”

Brighton Pavilion, Bristol West and Norwich South are the seats where the #Greens are projected to poll over 20%. pic.twitter.com/jaNH1q1GBd

According to Smith, this election campaign has been “the first where Voting Advice Applications (VAAs) have reached a level of maturity where their use can no longer be said to be insignificant.”

In fact, FF comes from around 3 data sources which are open to everybody, through which it is possible to get information related to different candidates and issues. Here are those 3, plus some others Smith recommends:

“The way they have visualised data ranging from share of the vote and past MPs, to forecasts and party spending is truly excellent. A perfect example of the adage ‘simple but effective’.”