John Rentoul of the Independent has the blog with the longest running single-blog meme in the known world. “Questions to which the answer is no” is now up to number 411 (“Will Barclays carry out its threat to leave UK?“),

I can’t compete with that, so I thought I’d start a list of Media Oops-es, i.e., cockups. This is all in the interest of media transparency, you understand. Shooting from the hip is just as big a problem for blogging journalists as it is for rednecks and Harriet Harman – though I suspect her invective was planned.

(Update: since this is about educating student journalists, I thought I would cross-post to the Online Journalism Blog in addition to the Wardman Wire).

The first one comes via Justin McKeating, who’s doing something slightly similar, though I suspect we’ll be tracking different bits of media silliness.

Rentoul came up with a slightly unflattering comparison:

A friend draws my attention to a resemblance I had not noticed.

Ed Miliband, he says, reminds him of Watto, the hovering, scuzzy garage owner on Tatooine who enslaves little boys in Star Wars Episode I: The Phantom Menace, my favourite film of the six.

But I thought he looked more like Gromit – the dog who is cleverer than his master who expresses himself mainly by his eyebrows.

If he’d just left it there none of us would have made a fuss. But he thought better of it and deleted the piece. As Justin says:

It looks like the mighty John Rentoul thought better of comparing Ed Miliband to the Watto character from The Phantom Menace and pulled the post without comment. You now get a ‘page not found’ error when you click on the link. Particularly piquant was when Rentoul noted Watto is ‘scuzzy’ and ‘enslaves little boys’. And he deleted his tweet advertising his insightful blog post (we know it was there because somebody replied to it). What a shame, denying future students of journalism this exemplary example of the craft.

Who am I to deny an education to students of journalism? I love computer networks with memories; and also search engines with caches. 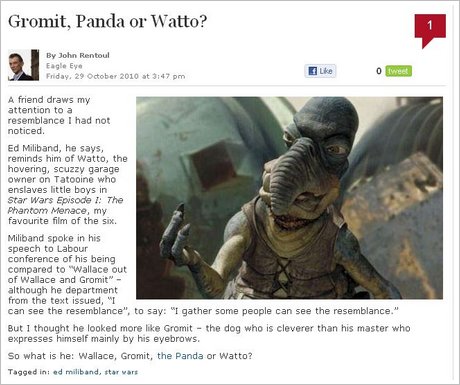 For the record, here’s the Milliman, who Rentoul (and everybody else) has previously compared to a panda: 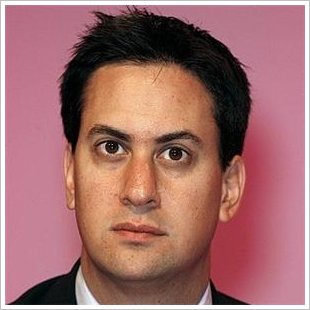 The best bit is that the next Rentoul blog post was all about “tasteless metaphors“.

(Update: since this is about educating student journalists, I thought I would cross-post to the Online Journalism Blog).

1 thought on “John Rentoul, Media Oops Number 1 : You cannot close the door once a blog post has bolted”