Last year the Investigative Reporting Italian Project (IRPI) introduced a platform for Italian and international whistleblowers, the first of its kind in the country.

The project has been called IRPILeaks and, like the Dutch PubLeaks and WikiLeaks, is a tool for those want to leak staying anonymous and safe.

IRPI aims to use this anonymity to encourage leaks from people who want to expose misconducts of companies and public authorities. A list of risks they could face in the process is published on IRPI‘s site.

It has been made possible by the employment of a software for secure communications, GlobaLeaks, created by the Hermes Center for Transparecy and Digital Human Rights.

IRPI also launched a crowdfunding campaign on Indiegogo to raise finance to cover basic costs, like hosting service and advertisement.

In an interview with Cristian Giulietti IRPI’s president Cecilia Anesi speaks about the project, the challenges the team is facing and the state of Italian investigative journalism.

Could you explain what IRPILeaks is?

First of all I want to clarify that IRPI and IRPILeaks are two different things.

The first is the association (us) while the second is the project for secure communications with whistleblowers.

It is coordinated by our team member Lorenzo Bodrero, but everyone of us has got access to the leaks.

The work based on the leaks we receive is given to a team depending on personal interests or expertise.

However, before any investigation begins, we perform an accurate fact-check on every piece of information we get in order to see whether we can use it or not.

In terms of technical security it is based on GlobaLeaks, a system invented by the guys of Hermes.

It uses the Tor browser to make users protected by outsiders and even us. We can’t see who the user unless he or she wants to be recognised by giving a name or a contact.

The system allows us to comment inside GlobaLeaks to ask for some further information. The whistleblower is given a ticket through which we can interact.

We would like to improve this communication implementing the system with a secure chat to make the interaction quicker.

Obviously if the leakers want, they can leave some personal details, like telephone number or e-mail address in case they want to be reached in other ways.

Tor is a system that makes impossible to locate your IP, showing different ones located in different parts of the world. In other words it is virtually impossible to be reached. 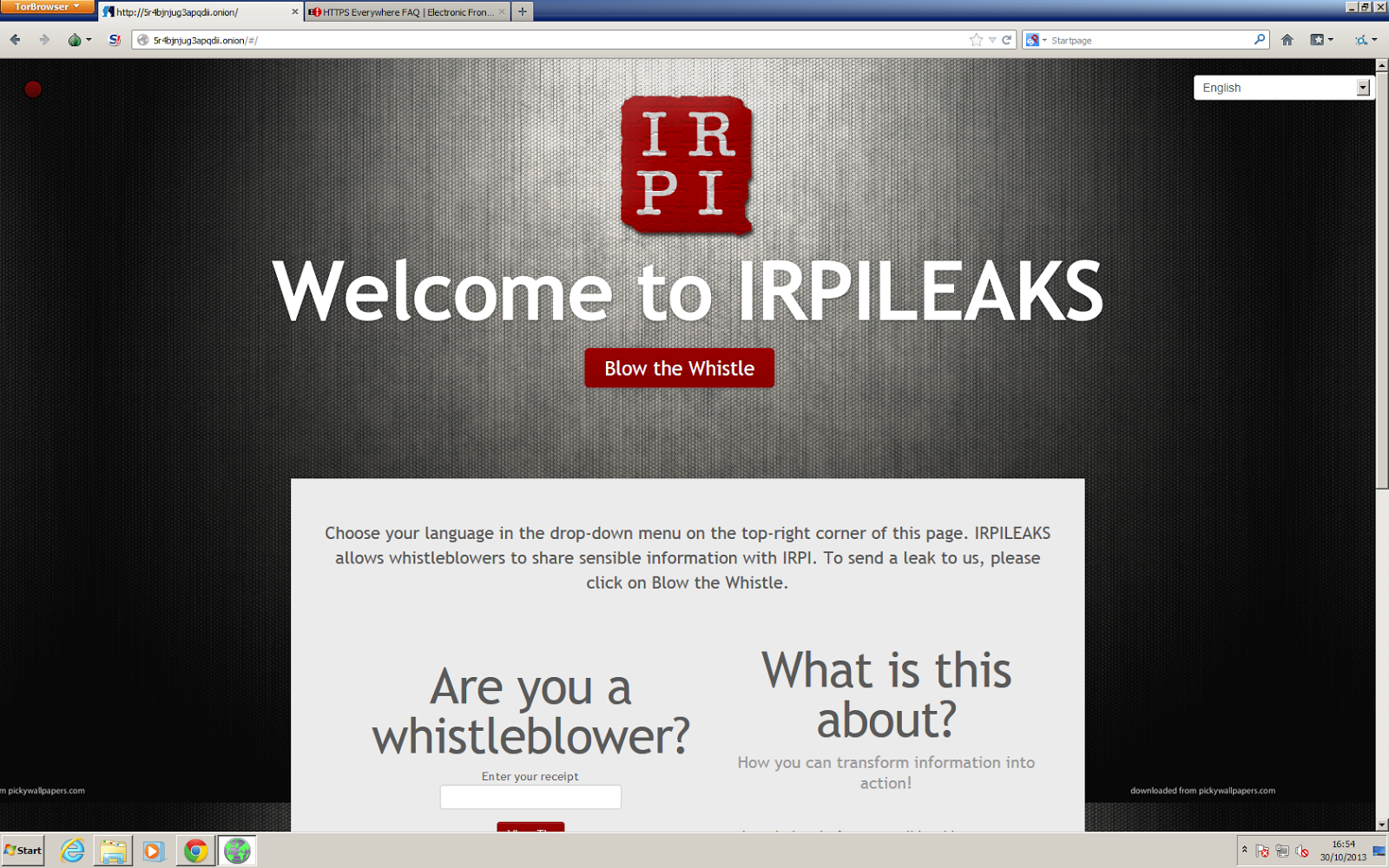 How IRPILeaks page on GlobaLeaks looks like, opened with Tor browser.

How did you do this before IRPILeaks?

We used to receive the information by unencrypted e-mails, which is a procedure that could put in danger the whistleblowsers and us.

Initially we did not want to publicly launch this initiative neither, but we were just seeking a communication platform to be used by anybody who wants to give us some important information.

We haven’t lived in any situation of danger so far but, after all, we live in a country where criminal groups play a significant role in society, so even if we deal with a leakers who don’t seem to live a dangerous situation, we have to guarantee their safety.

We spent 6 months looking for technical solutions, and were thinking to adopt a system based on GPG. We wanted to use the software with the simplest interface, to make the user more comfortable.

But we then met the GlobaLeaks team at the International Journalism Festival in Perugia last year and after talking with them about our needs, their platform seemed the best solution.

How did the initial flow of leaks go?

We received a lot of material, but it is not all valid. Some information is based on no proof.

But other things may be useful. Now we are filtering what we think it can be used.

Not having a proper newsroom to rely on, the procedure is not quick and it is all reliant on a volunteer base.

Then, we also look for funding for the association while working at our projects. It is tough. In contrast, projects like PubLeaks have 5 or 6 media outlets working on their material.

How do you judge the information that you receive?

First of all we try to set up a first communication with the leaker inside the system to possibly ask for more evidence.

Then we fact-check the information they provide through intense internet research or addressing different authorities or our sources.

Then it is all about investigative journalism skills.

An important thing to mention is that we don’t publish data or information that we receive, as we keep those confidential. We just build up an investigation, a process that can take a short time or months, and we will only publish the information we receive if it is important for the public interest.

Have you received some interesting information so far?

We have received a lot of requests and none of them are banal. They are all interesting in terms of content.

But some of them are simply unusable. Many are too local, while we look for more national and international contexts.

For instance if a town major has stolen €1,000 from the taxpayers, it is better to go to the local attorney.

Others are not supported by any evidence to build up an investigation on.

Again, if we had more funding available and a bigger team of, for instance, 20 journalists, we could organise better our job, with two of them seeking for evidence and others working on the investigation itself.

Apart from this, some reports we had so far are simply impossible to use for an investigation.

Who is your target user?

It would be good if any employee aware of illicit actions by their employer’s executives considers using the system, which is a secure way to avoid risking their job or other bad consequences.

Then we want that IRPILeaks to be used internationally, since we mostly seek cross-country investigations.

We are based in Italy, but work on stories from all over the world.

So far we had just Italian reports and it has not gone so bad, but we really look to elevate to an international base.

IRPILeaks was presented at the latest Global Investigative Journalism Conference in Rio de Janeiro, where we hosted a very interesting panel.

We went there with the guys of GlobaLeaks and we all experienced a lot of interest in our initiative from colleagues based in other parts of the world.

We hope to create some productive interactions with some international fellows.

What results would you like to see from IRPILeaks?

One thing is surely to receive further information after an investigation has been published.

Every investigation has a natural end as there are always some limits that stop you to go further – unless you are not a magistrate or a super-hero! Particularly in mafia-related affairs.

The system does allow the user to do this, minimising the danger. It automatically deletes the leaks after some time, so in case of sequester your computer doesn’t have traces of anything.

We are currently looking for an affordable tool that allows our group to share information between us, like a sort of secure Dropbox.

Unfortunately some of these tools already exist but they are far from affordable for somebody like us who has limited financial resources.

Journalists have always been given leaks, and we want to use Internet to guarantee our safety and, mostly, the safety of the whistleblowers. This is the minimum we could do for them.