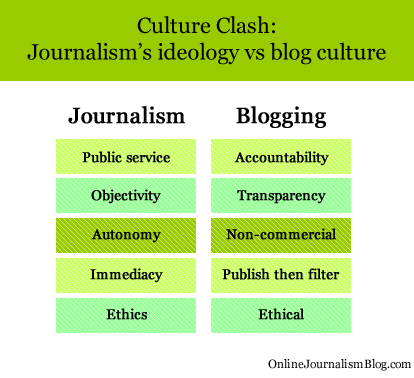 If you read the literature on journalism’s professional ideology – or just follow any argument about journalists-versus-the-rest-of-the-world – you’ll notice particular themes recurring.

Like any profession, journalism separates itself from other fields of work through articulating how it is different. Reading Mark Deuze’s book Media Work recently I was struck by how a similar, parallel, ideology is increasingly articulated by bloggers. And I wanted to sketch that out.

First, two disclaimers: I am not claiming that bloggers are a coherent body any more than journalists are. Blogging is of course not a profession, and many bloggers do not make any claims beyond their own personal beliefs.

What I am exploring here is a common ideology that a particular contingent of bloggers expresses when attacked by journalists, or when attacking professional journalism.

One of the reasons this parallels journalism’s professional ideology may be because the arguments are often made in response to that exact ideology: journalists argue that bloggers are not objective; bloggers counter by arguing that journalists are not transparent, and so on.

Secondly, this is not based on any systematic research, but rather reflecting on ongoing analysis over the past few years. I’m putting this up for discussion and as a basis for further research, rather than suggesting it is the finished article.

The journalist’s claim is that they are performing a public service, whether that is informing the public, holding power to account, giving a voice to the voiceless (or the ‘voice of the people’), providing a forum for public discussion, or something else.

Bloggers articulate a similar ideology: that they are directly accountable to the public through their comments and the ability of others to direct them in how they ‘serve’.

The journalist’s public service is top-down; the blogger’s, bottom-up.

This is a long-running debate that I barely have to articulate, as it is easily the most prominent ideological battle that has taken place between journalists and bloggers. But here it is: journalists say they are objective while bloggers are subjective. Bloggers argue that any claim to objectivity is flawed, that the grounds for it (limited access to publication) no longer apply, and that in the age of the link transparency is their own badge of honour. Journalists who do not link to their sources, who take credit for the work of others, and who fail to declare interests are all targets in this battle.

A part of journalism’s ideology that is employed much less often in defending the profession is its autonomy: the fact that journalists are independent of government and that there is a church/state separation between advertising and content.

Bloggers articulate a similar argument around their very non-professionalism: because we do not rely on advertising or cover sales, say the bloggers, we enjoy more independence than journalists. We do not need to chase ratings or circulations; we do not need to worry about the institutional voice, or offending advertisers.

Ideology 4: Immediacy vs ‘Publish then filter’

The fourth aspect of journalism’s ideology identified by Deuze is ‘immediacy’, that is, journalists’ desire to be first to report the news.

Bloggers have their own version of ‘immediacy’, however, which is that they ‘publish, then filter’, allowing users to act as their editors (or ‘curators’) rather than being constrained by any editorial production line.

It’s notable that as journalists’ claims to immediacy come under particular challenge in an age where anyone can publish and distribute information, some journalists and news organisations are re-orienting themselves towards a role of ‘curation’, and using the ideology of ‘editorial process’ to defend themselves against the new entrants.

This is a line that has always fascinated me. Journalists frequently employ their professional ‘ethics’ as a defence against the incursion of the blogging barbarians. But if journalists were so ethical, why are they consistently one of the least trusted professions?

Journalistic ethics are explicitly declared in documents such as the NUJ’s Code of Conduct, individual organisations’ own statements of principles, and even journalists’ contracts, while organisations such as the PCC act to further enforce behaviour.

Similar attempts to create a code of ethics for bloggers have been met with objections – for reasons not too dissimilar to the reasons that journalists do not want their profession to be professionalised: it would limit access, and provide an opportunity for governments to control the medium.

But bloggers are fiercely ethical. How is difficult to pin down – the transparency ideology outlined above is part of that, and many elements are shared with the ethics asserted by journalism: protecting sources, for instance. But broadly this ideology is one that is held in opposition to the worst excesses of journalism: bloggers would argue that they do not resort to underhand tactics in pursuit of a story: exploiting vulnerable people, passing off others’ work as their own, or pretending to be someone else.

What have I missed?

There may be other themes that I have missed – or examples of the above (after I wrote a first draft of this, Jay Rosen published his own selection of quotes here, some of which I have linked to above). It may be that journalism’s own ideology is changing in response to these challenges (as it seems to be regarding immediacy vs curation). I’d love to know what you think – or if you know of any research in the area (some here and here).