A few weeks ago I started writing a post about Snapchat for journalists. It ended up so long that I decided to turn it into a small ebook. But I thought I’d split that original draft – just under half the length of the finished ebook – across a number of posts here on OJB. I hope you find it useful.

In a long history of technologies journalists have struggled with, Snapchat could be the most frustrating of all.

On the one hand: promises of insane engagement and impressive advertising rates.

On the other, however…

Well. Firstly there’s the ephemeral nature of the tool: creating content designed to disappear is precisely the opposite of what journalists aspire to.

Secondly there’s that obtuse-to-the-point-of-arrogance interface that can be summed up with the advice ‘Just swipe somewhere.‘

If you struggled with the limitations of 140 characters, Snapchat takes things to a whole new level: vertical video, over-emotional stickers, and the choice between a) using a typeface that makes you look like a government bureaucrat in 1978, or b) scrawling bright red text on the screen like a demented crayon-wielding five year old. 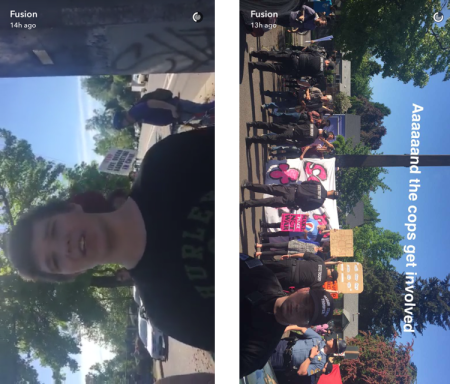 Fusion fail to realise that Snapchat is a vertical medium

There is that engagement. And an audience you can’t easily reach elsewhere.

And to be honest, once I got my head around Snapchat, I started to see storytelling possibilities that other platforms simply don’t offer. And I hope you will too.

It’s useful to list all the things that bug journalists about Snapchat in order to tackle them head-on. Here goes…

Before I do that, it’s worth making some important distinctions: when people talk about Snapchat they can be actually talking about more than one thing. These are:

One feature missing from Snapchat Discover is the ability to link outside the app: stories have to resort to URLs which users must then type in elsewhere manually

The first challenge, then, is being clear which Snapchat you want to use.

When you open up Snapchat you are taken straight to the filming screen:

In fact, because Snapchat Discover is so professional, it can be a real discouragement: producers on those channels have access to features most Snapchat users can’t dream of.

But that doesn’t mean you should ignore Discover: watching vertical video on those channels (one of the few features it has in common with Snapchat stories) in particular will show you examples where vertical video works well (while also, annoyingly, featuring lots of examples of horizontal video embedded in text stories).

The same applies to Snapchat’s chat feature. If you can find someone to chat with this can be a good space to get used to the informality of Snapchat style, and play with its features.

You can start a chat in various ways, but perhaps the simplest and most flexible is to go to the messages screen and tap the ‘speech bubble’ icon in the upper left corner, choose who to chat with and then compose your message. Note that with chats you can type text, upload images from your phone, access different ‘stickers’ and have video or audio calls – none of which you can do with Stories.

The Discover channels bear a little explanation too. Here’s a quick rundown: 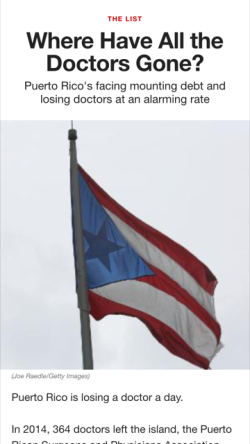 An example of a ‘headline’ screen in Snapchat Discover

But for this post I’ll be focusing on the one feature that can be used by all journalists for a public they want to communicate with: Snapchat Stories.

Snapchat is a particularly informal platform: its language and conventions have been invented by a userbase which was younger than Facebook’s or Twitter’s. For that reason it particularly suits softer topics, and broadcasters.

That doesn’t mean you can’t do hard news on the platform – you’ll find a lot of politics on the BBCnews and CBSnews accounts, for example – it just means that the presentational style is more informal than you might be used to if you’ve worked in hard news and print.

In many ways Snapchat can be quite conventional, a throwback to magazine and broadcast formats most journalists will be familiar with. Two particularly common ways to tell stories using the platform, for example, are:

…albeit with stickers, filters and text, which I’ll come onto below.

A simple way to get started with Snapchat is to collect together images to tell a story.

Images don’t all have to be still: consider filming short video clips as ‘moving images’ to add variety to your photo story.

You have to take the image or video within the Snapchat app – there is no option to upload images in Stories, although you can cheat by taking a photo of a computer screen – and the images must be vertical.

Captions can then be added to the image using the text button (T icon) in the upper right corner. Type your text but don’t click ‘Done’ on the keyboard – then choose one of the following: 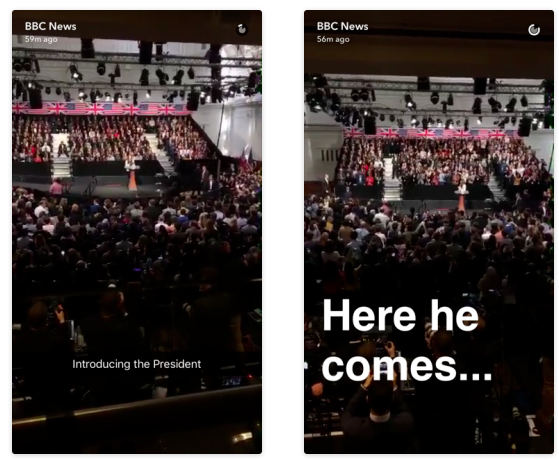 The BBC use a simple caption first, then switch to a larger one to ramp up tension

You can illustrate your images and text further using stickers and the pencil options, but I’ll come onto those later.

The ‘speaking to camera’ element is why broadcasters seem to do so much better on Snapchat: it helps if you are able to talk on camera and not feel like an idiot.

Many stories rely on the journalist speaking about something which does not have a visual element. This development is quite surprising: for years the received wisdom has been that broadcast conventions of ‘filling screen time’ (think: presenter standing outside court reading a statement from the lawyer) had no place in online journalism, and every piece of video had to justify itself.

On Snapchat, this is simply not the case: the ‘presenter’ is once again a crucial element: not because the video has any inherent journalistic value, but rather to give us a human connection.

Along the same lines some broadcast practices are worth employing here: placing yourself in a relevant and interesting location, for example, can make for much more interesting video than filming yourself at your desk.

But broadcasters still have to adapt their broadcast style somewhat: ditch the po-faced seriousness, for example, and treat this as a genuine conversation.

You should also consider using captions as mentioned above, for example to add extra details to what you’re saying.

And bear in mind that the maximum length of a single video ‘snap’ is 10 seconds (although there is a workaround). You might want to string together more than one clip to get over this limitation, but it’s much better to think of other ways to communicate the same information – for example still images with captions or, better still, interviews…

Of course it’s much better if it’s not just you speaking on camera. Using Snapchat to do short interviews adds something original to your content and gives it more variety of voices.

CBSnews’s election reporting, for example, combines the reporter’s pieces to camera setting context (on location too!) with what are basically vox pops from voters.

Those vox pops use captions to add details about the person being interviewed – sometimes simply their age and where they’re from, but other times summarising their position.

I’m not a big fan of vox pops – they are often unenlightening and a lazy option – but they can suit Snapchat’s brief video format well if the topic also suits (an election being a good example). 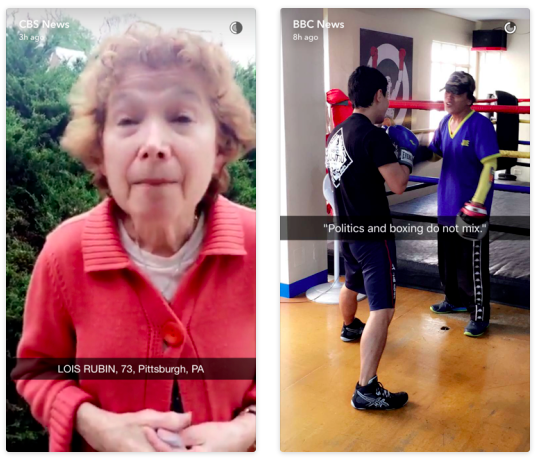 These vox pops use captions to add demographic details, or summarise a quote

But beyond vox pops you can also use short video interviews to summarise experts’ or politicians’ thoughts or positions.

You can also use Snapchat to do an ‘interview story’ which breaks up a series of 30 second video clips with other material such as illustrative images, or other contributors.

You can get the book on Leanpub or the Kindle Store.

37 thoughts on “Snapchat for journalists: a great big guide”