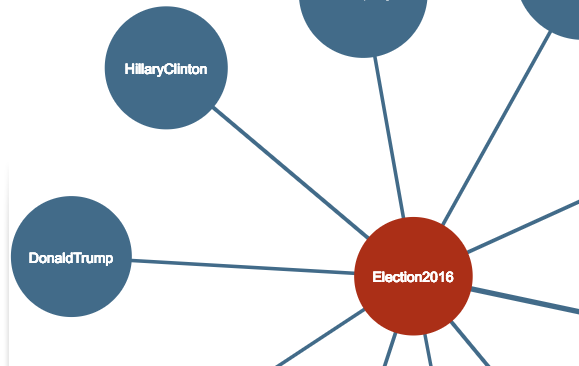 Tonight many journalists will have Tweetdeck or similar social media dashboards ‘tuned in’ to coverage of the US election, typically by creating columns to monitor activity on key hashtags like #Election2016. But on a big occasion like this, the volume of tweets becomes unmanageable. Here then are a few quick techniques to surface tweets that are likely to be most useful to reporters:

Hashtagify is a tool for finding out the popularity of certain hashtags. Type a tag into the search box and you’ll get a network diagram like the one shown above — but you can also switch to ‘Table mode’ to get a list of tags that you can sort by popularity, correlation, weekly or monthly trend. END_OF_DOCUMENT_TOKEN_TO_BE_REPLACED 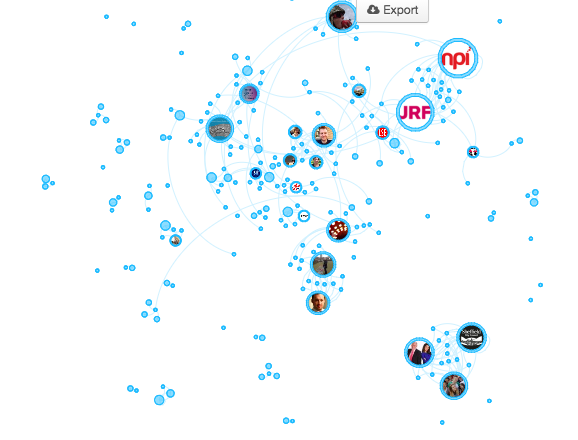 A version of this post originally appeared on Help Me Investigate Welfare.

Twitter tool FollowerWonk has a facility for searching biographies on the site – make sure you select “search Twitter bios only” from the drop-down menu. END_OF_DOCUMENT_TOKEN_TO_BE_REPLACED

A year or two ago, as Twitter and FriendFeed in turn made headlines, much was made of how we were increasingly consuming information as a stream. Last January I blogged along those lines on why and how I followed 2,500 people on Twitter – why? I dip in and out rather than expecting to read everything. How? I used filters and groups for the bits I didn’t want to miss.

From a stream to a delta

The features in question are Twitter lists and Google Reader bundles.

Likewise, as I start to gather my Google Reader subscriptions into some sort of order, I’m moving from a default behaviour of dipping into ‘all items’, to switching between particular bundles of feeds along the same lines: data blogs, technology news, my students’ blogs, and so on.

To continue the ‘stream’ metaphor, I’m breaking that torrent into a number of smaller rivers – a delta, if you like. (Geographers: feel free to put me right on the technical inadequacy of the analogy)

Just as the order of things in a networked world has changed from ‘filter, then publish’ to ‘publish, then filter’, it strikes me that I’m adopting the same behaviour in the newsgathering process itself: following first, and filtering later

Why? Because it’s more efficient and – perhaps key – the primary filter is search. And you have to follow first to make something searchable.

In fact, Google itself is a prime example of ‘Follow, Then Filter’, following links across the web to add to its index which users can filter with a search. (another good example is Delicious – bookmarking articles you’ve not read in full because you may want to access them later).

Twitterfall has been around for a month now, and if you’re a journalist, this is a must-see – for about ten minutes. Then it becomes a must-use.

Don’t worry, I’ll get over this Twitter thing very soon, but for now I want to address all of the ill informed coverage that stifles use of Twitter because it can’t see beyond a) celebrities using it and b) the Facebook-style status update thing.

If you’re struggling to think of what to talk about on Twitter, here are some suggestions: END_OF_DOCUMENT_TOKEN_TO_BE_REPLACED

Just to clarify: I have no objection to anyone having personal limits on the number of people they follow on Twitter – only imposing that on others. Here are some of the many reasons people set limits. I’d love to know yours. END_OF_DOCUMENT_TOKEN_TO_BE_REPLACED

OK, I’ve had enough. That’s it. I’ve had enough of people suggesting we should all have limits on the number of people followed on Twitter. The tweet that did it? Peter King, who suggested “Twitter should cap how many people you can follow at 10% of the # of people following you. Put a premium on the # you follow.” and “Twitter needs to be a place for leaders to lead. Otherwise we’ll cancel each other out.”

Yeah, that’s what we need: more leaders. And forcing people to broadcast to an audience before they can listen to anyone.

Many people have a ‘quality not quantity’ strategy with Twitter where they restrict themselves to following a certain number of Twitterers. But by using certain tools and adopting a certain mindset, I think you can have both quality and quantity. So here’s how I ‘follow’ 2,500 people on Twitter: END_OF_DOCUMENT_TOKEN_TO_BE_REPLACED