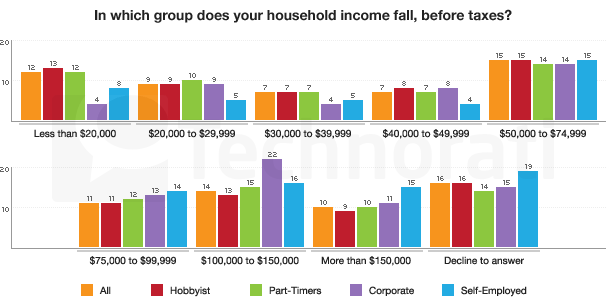 Bloggers are generally more affluent than the average person

5 things journalists should know about the report:

Last week over five days, Technorati released the annual 2009 State of the Blogosphere Report with a strong theme of gaining strength. A record number of 2,828 bloggers submitted extensive surveys about their blogging activities from the past year from 50 countries, with half from the US (48%), 26% from the EU, 10% from the APAC (Asia Pacific) and 16% from elsewhere.
Results were combined with interviews with professional and well-known bloggers and statistics and findings from Lijit and Blogcritics. Bloggers were separated into four distinct groups; hobbyists, part-timers, self-employeds and professionals.

While blogging is gaining in popularity and credibility, the blogging demographic doesn’t appear to be widening. The average blogger continues to be male (two thirds), affluent (a majority have household incomes of an average of $75,000) and educated.

While most bloggers are blogging more regularly and have at least three blogs, the majority consider their output a hobby (72%).

The vast majority of bloggers seek to share their personal experience for emotional and personal fulfilment rather than monetary gain. Most bloggers feel their blog has acted positively on their personal and professional lives. Generally, respondents said they blog for one of three distinct reasons: speaking one’s mind; sharing expertise and experiences with family and friends (old and new); and making money or doing business.

70% of all respondents say that personal satisfaction is a way they measure the success of their blog, but for Pros, the leading measure of success is the number of unique visitors.

The survey found that contrary to popular belief, many bloggers have had professional media experience, with 35% of all respondents having worked in traditional media as a writer, reporter, producer, or on-air personality, and 27% continue to do so.

Interestingly, the report found that while bloggers read other blogs they do not consider them a substitute for other news sources and the majority do not consider online media more important than traditional media. However, 31% don’t think newspapers will survive the next ten years.

The report highlighted the instrumental role the blogosphere has played in recent global issues; namely the protests during the recent Iranian elections and debate surrounding last year’s US presidential elections. Even though only a relatively small number of bloggers commented on these events, bloggers believe their influence on global affairs is growing. 51% believe it will be a more effective tool to voice dissent in the future and 39% believe blogs made the Iranian protests earlier this year more effective.

Bloggers are getting savvier and more influential. Most bloggers know how their blog is created and use an average of five activities to draw an audience to their site. Bloggers with greater audiences and with Technorati authority ratings blog more regularly, posting more than 300 times more than lower ranked bloggers. One in five bloggers report updating on a daily basis, but the majority update their blog two to three times per week. The survey results and interviews with influential bloggers clearly show the number of page views depends on how prolific a blog is.

More bloggers are earning some revenue from their blog, but they are not in the majority and most income streams are indirect. For 83% of people that make money from their blog, it is not their primary income. Interviewees agreed the key to a successful blog is passion. In each case they describe how professional and lucrative blogging stemmed from their original passion and drive.

The growth of Twitter is having a big impact on the blogosphere. A large proportion of bloggers (73%) report using Twitter, largely for promotion and interaction with readers, compared with just 14% of the general population. Furthermore, according to Lijit, blogs with greater than 100 page views a day received on average 83% of their page views from Twitter referrals. Twitter was also by far the fastest growing content source to be included by bloggers.

11 thoughts on “2009 Technorati State of the Blogosphere Report – key findings.”