If the inverted pyramid as a writing form is tied to the printed page, what writing form does the web suggest?

That was the question asked by João Canavilhas of Portugal when he proposed the “tumbled pyramid,” a more open story architecture designed to encourage online navigation and personal reading paths. Canavilhas describes a new structure with four levels: base, explanation, and two levels of exploration.

I’ve wrestled with the same question. My solution: the “mapped” writing model (interesting how we reach out to new metaphors to replace old ones). Where my approach differs is its simplicity. The mapped model is really just a specific way to organize information. It assumes little change in how you, as the practitioner, define a story or function as a journalist. I’d like to explain the concept and how it rethinks the inverted pyramid. 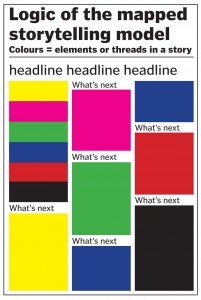 The mapped model views the news story as a whole and parts. First comes a summary of the main elements. Then the story breaks into an orderly conversation of one element or thread at a time. It’s up to the writer to define the content threads. Each thread starts with a subhead that clearly conveys what comes next, for example: “what happened,” “what witnesses saw,” or “next steps in the process.” The subheads function as a map, telling readers ahead of time where the story will lead, what turns in the road they can expect, and reminding them where they are. This form seems to work best on longer news and feature stories.

Below is a simple example of a mapped story I wrote recently for our community newspaper. I presented the story experimentally in a simple Flash file, to see how it might look on the web. You won’t be wowed by zippy graphics. It’s meant to show how the subheads can become the means of navigation, literally. On the web you could also present this story as a continuous text, with subheads set into the story, acting as signposts.

ORIGIN OF THE CONCEPT:

I developed this model as a news designer a few years ago as I tried to imagine ways to make stories easier to read.

I was troubled by what seemed like information chaos in many news stories dealing with complex topics. With a background in writing, I began to analyze how stories were built. I used color markers to highlight the various categories or threads present in a story, wherever they showed up in the text (I choose the colors at random). For example, “background” might turn up as a block of yellow in the second paragraph, then again in the sixth paragraph, then as a chunk toward the end of the story. Fully deconstructed, the story might contain six or eight threads, showing up as a patchwork of colors.

It was hard work at first. As I surveyed texts at my own newspaper and elsewhere, comparing structures in writing, an intriguing picture emerged. On one hand, I realized I had stumbled onto a useful way to see and describe some of the building blocks of writing. Shaping and layering are skills some writers seem to pick up almost intuitively, but don’t often talk about. On the other hand, I could now “see” the chaos I felt as I read some stories. A change in topic shows up as a shift from one colour to another. Frequent colour shifts indicate a dense weaving of elements.

In many cases, the reason for the chaos can be traced back to the inverted pyramid construct. By orienting an entire story around newsworthy fragments, we make it harder to have a more paced and logical conversation geared to readers who aren’t as familiar with the subject. Perhaps this partly explains why we have a hard time attracting younger readers.

In my survey of storytelling forms, I noticed a few writers using a whole and parts logic. This seemed to get around the problem of confusion caused by too much toploading. My color-coding technique revealed far fewer shifts between colors and more sustained chunks of monologue. As a designer, I tinkered. I introduced subheads as a reader help. I gave the model a name.

REACTION TO A NEW FORM:

Does the mapped writing model work? Jacqueline Farnan, then an associate journalism professor at St. John Fisher College in Rochester, New York, spotted an article I had written for a writing coaches’ newsletter, contacted me, and suggested a formal study to find out what newspaper readers thought. She selected a published story from her local paper and I reorganized it according to the mapped model, being careful not to do any actual rewriting. She led focus groups where participants compared the two versions of the story. The result: 70% of readers preferred the mapped version.

Unfortunately, the idea didn’t catch on in print. The idea of segmenting text and interrupting it with unsexy subheads made writers queasy. Print reporters steeped in the subculture of the inverted pyramid found it incompetent to subordinate newsworthiness in the writing to some organizational structure. I could see I was bumping into some of the fundamental assumptions of my craft.

I put my ideas on the shelf, where they gathered dust for more than a decade. In the back of my mind, I wondered if the mapped model might have more application on the web. It seemed to align perfectly with the thinking of web usability experts such as Jakob Nielsen. So when I decided recently to upgrade my own education, it was great to read about the “tumbled pyramid,” the “news diamond,” and a group of people thinking about ways to adapt journalistic practice for the online environment.

SO TRY IT, ALREADY:

If you feel like taking the mapped model for a spin, you may be surprised. As a writer, you’ll find when you announce your topic in a subhead, now you have to deliver on that promise or the story will come across as weak. Scattered bits of information don’t work. Each of the threads tends to turn into a more complete, rounded, transparent conversation. There’s a disciplining effect and I believe the result is a better story.

Some tips: Take care to write subheads that provide a clear map or index when read on their own. Try not to repeat the subhead words in the text. Craft each segment.

I’m speculating here, but it seems to me this model would support the evolving, collaborative nature of the “news diamond.” Early in the cycle, only a short story would exist, the top. Later, threads would sprout and develop as more news comes in. With a clear, transparent writing structure, it’s easier to include more voices and angles in the story while retaining a cohesive focus. Whole threads could be devoted to the levels envisaged by Canavilhas and others, for analytical perspectives and links.

Does the mapped model bring us closer to multi-level navigation and differentiated reading? Good question. Drop me a line at hedleyd@shaw.ca if you try it. I’d love to hear how it goes.