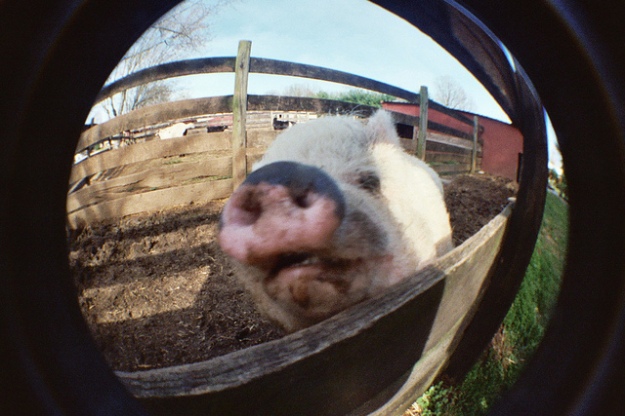 In a guest post for OJB, Christian Mihr explains how German plans to allow surveillance of foreign journalists represent a threat to reporters all over the world.

There is perhaps no author more quoted when it comes to surveillance than George Orwell, and his book 1984. The recently proposed reforms to Germany‘s Foreign Intelligence Service, BND (Bundesnachrichtendienst), however, bear more resemblance to Orwell’s novel Animal Farm.

In the novel, farm animals drive their human masters away in hope of achieving democracy. But once the pigs of the farm seize power they become as tyrannical as the humans that came before them, proclaiming:

Some journalists are more equal than others

Politicians are of course not pigs; however, this single principle of the pigs in Animal Farm seems to be the underlying assumption which led the German-ruling parties SPD and CDU/CSU (Social Democrats and the conservative Christian Democrats and Christian Socialists) to draft the new BND law, proposed at the end of June to the German public.

In the law, those more equal than others are not pigs, but rather German journalists.

Under the new law, the BND is not allowed to spy on German nationals, can limitedly spy on EU nationals, and may fully spy on non-EU nationals if by doing so the effectiveness of German “capabilities” is ensured or if it contains “insights into foreign policy strategy or national security interests.”

Exactly one year ago, reports of NSA wiretapping of the German news magazine Der Spiegel prompted international outrage. Yet this is exactly what the BND will be allowed to do abroad — with the full support of the law.

Passing on information on foreign journalists to foreign intelligence

Worse still, the BND would now have the legal authority to pass information obtained regarding foreign journalists onto other foreign intelligence agencies.

Exemptions for journalists — such as one contained in paragraph 3b of the G10 law, a relevant German law regulating limitations to the constitutional secrecy of mail and telecommunications — are completely absent from the new BND draft law.

Instead of depriving foreign journalists of the protections enjoyed by their fellow German colleagues, the government should have rather addressed the shortcomings and flaws of the existing legislation.

And regarding the issue of granting differing fundamental rights to journalists on the basis of nationality, not even German journalists would be protected against surveillance by the BND in the long term: This could spell dire consequences for their work.

International collaboration is a security vulnerability

In the Panama Papers investigation, for example, the International Consortium of Investigative Journalists, or ICIJ, revealed the tax evasion of hundreds of celebrities, dictators and businessmen involving 109 media organizations from 76 countries.

In theory every communication of Germany’s Süddeutsche Zeitung, which was involved in the Panama Papers investigation, would have been protected from disclosure.

In reality the BND could have intercepted all emails and phone calls between media organisations from non-EU-countries.

And in doing so the BND would of course have collected sensitive data about the Panama Papers and would have opened a backdoor to access editorial confidentiality.

In a globalised world, foreign journalists – who often work under much harsher and more repressive conditions than their German colleagues – are dependent on collaboration with international media outlets for placing their topics on the global agenda.

In fact, the BND reforms are much more about legalising controversial activities rather than curtailing them. Thus, the Reporters Without Borders lawsuit filed against the BND last year is all the more relevant.

The draft bill has already been approved by the German cabinet, and underwent an initial reading by the German parliament (Bundestag) last week.

However, the new law still requires approval by the German parliament this autumn.

This approval will go smoothly if there isn’t a large enough public push-back.

Edward Snowden and the OSCE Representative on Freedom of the Media Dunja Mijatovic have already voiced their concerns and critiques of the new reforms.

Taking into account that technical and hacking experts consider that distinguishing between national and foreign data is impossible, it seems that all journalists are once again equal: equal victims of surveillance, equally disregarded by the German government in the struggle for democracy and preserving press freedom as a fundamental human right.

Christian Mihr is the Executive Director of Reporters Without Borders in Germany (RSF).

1 thought on “German intelligence reforms: will some journalists be more equal than others?”