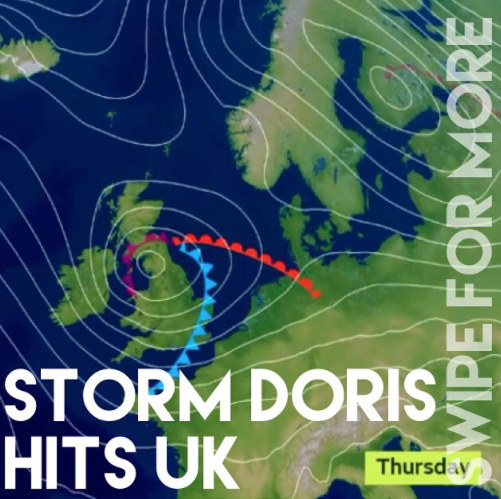 Using Instagram’s new feature to tell Storm Doris story. Note the call to action to ‘swipe’: this can also be done in the caption to the first image or video.

This week Instagram announced a new feature that allows its users to share up to 10 pictures and videos within a single post. The feature resembles Stories in some ways, but with this key difference: posts are permanent. In a special guest post, Sam Gould explores how the feature can be used by journalists and news organisations.

You might be mistaken for thinking Instagram’s new “multiple photos and videos in one post” feature is just the same as Instagram’s Stories feature, which they introduced in August. But there is one difference which is key for journalists and publishers: these posts are permanent.

Although Instagram haven’t referred to the new updates as a slideshow or gallery, that is perhaps the simplest way to describe the new feature: users can swipe from left to right to move between pictures, and/or videos.

Up to 10 pictures and/or videos can be shared within a single post. Just like any other singular post, you can edit the caption or location. Similarly to Stories, you cannot reorder or edit individual parts, but you can’t delete them either. To make these kind of changes, you would need to delete the entire post and then re-share it.

The new feature opens up a range of opportunities for publishers, whether sharing headlines at the start of the day, or a collection of photos for one news story. I can also see this being a hit with comic strip artists.

I took some time to experiment with this new format, working out what styles of content works best for news. I’ve also taken a look around Instagram and found some examples already from organisations already starting their own experiments.

My experience of this new format, both as a creator and as a user, is that it is good for pulling together a series of pieces of content that have something in common. This common link could be the subject matter, or simply time.

In the headlines post I made below, for example, the series is tied to a specific time: in this case, 4pm. Because this peg was clear in the cover photo, the different subjects that followed didn’t confuse the user.

When the subject matter is the same, as was the case with the Roald Dahl exhibition sequence below, the series needs no further explanation. The title I gave this series provided some information, with a more thorough description in the caption.

This combination meant the post was attractive to view, but also gave the viewer the necessary information they needed.

Examples in this format where there is no title page make it difficult to understand what is going on straight away. NBC and ABC News use of the format so far, for example, leave viewers relying on the caption to provide information.

In NBC’s case, this made for awkward viewing. Their series opens with a video without context, and so by scrolling down to read the caption you miss some of what is being said in the video.

Below I’ve embedded a series of examples of different approaches to storytelling using the new format. Note: these updates work (and look) much better in the native Instagram app. And don’t forget to swipe left and right to explore them!

One of the easiest ways to get started with Instagram in news is to provide a window into the editorial process. Here’s an example:

Panoramic pictures can work well in the format: below I’ve used an image of a bridge in a park, showing how the new format could carry a continuous picture as opposed to individual images (this looks much better within the app).

Here the stories are hooked on a snapshot in time, the equivalent of the evening news headlines.

A weather story and an arts story provide two examples of how to use the format to pull together images or video with a shared subject.

Note the use of captions in these early experiments in the format by traditional news organisations. Readers have more time to read captions, and more control over timing, than in the Stories format.

Swipe ➡️ to see Attorney General Jeff Sessions’ statements this morning about meeting with the Russian ambassador, his original comments made during his confirmation hearing, and leading Democrats calling for his resignation. . "I have not met with any Russians at any time to discuss any political campaign," #Sessions said to NBC News’ @hallie_gram this morning "and those remarks are unbelievable to me and are false. And I don't have anything else to say about that." . Sessions' spokeswoman confirmed Wednesday night that he had met with the Russian ambassador to the U.S. before the presidential election last year in his capacity as a then-senator — raising questions about whether he misled fellow senators during his attorney general confirmation hearing in January. . Sen. Al Franken, D-Minn., questioned #JeffSessions during his confirmation hearing about whether he or anyone affiliated with the Trump campaign spoke with the Russians. . "I have been called a surrogate at a time or two in that campaign, and I did not have communications with the Russians, and I'm unable to comment on it," Sessions responded at the time. . (📹 @NBCNews)

Have you used the feature or seen other examples? Let me know in the comments below, or get in touch.

@paulbradshaw I just found in analytics that the slideshow/multi posts are called "carousel posts". Stats start from March 1st it seems

Sam Gould is a student on the MA in Online Journalism (the MA in Multiplatform and Mobile Journalism from September) at Birmingham City University. A version of this post was first published in two parts on his personal blog.