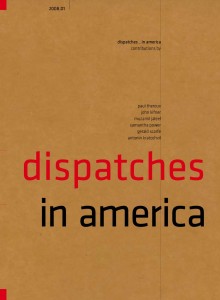 dispatches is a new current affairs quarterly with a companion website, Rethink-Dispatches.com featuring original content as well as extracts from the magazine.

Virtual Intern Natalie Chillington put forward a few questions to editor and art director Gary Knight about the online side to dispatches.

Why is dispatches not published online?

“Principally [the fact,] that our content is not web compatible in so far as web users don’t respond to 25,000 words and 80 images. The point of dispatches is depth. Having said that we do have a website and it will grow.”

Knight hopes that Rethink-Dispatches.com will be used in addition to rather than instead of dispatches.

“I am currently reading a 700 page book on the Korean War by David Halberstam and I would never do that on the web,” says Knight, “but next to me is my laptop and when I want more background on the players in the book I look them up on the web.”

The fact that dispatches is produced by just four people – three of whom have other jobs – also means that the team has had no choice but to prioritise. “We decided to get the book right first.”

In comparison to other sites

Perhaps as a result of having a small team, the website is rather simple and lacking in interactive features – although effective nonetheless in, as the Mission Statement says, “aiming for the widest possible appeal.”

I asked Knight how he felt the website compared to other magazine websites.

“We have made no attempt to put the whole book online. Most magazines have a staff of over a hundred and come out weekly. We are properly compared with Granta or the Paris Review, both of which have more than one member of staff! I would judge our website in a year.”

It seems Rethink-Dispatches.com is a work in progress and it will be interesting to see how the team chooses to make use of multimedia to enhance their product.

“As time goes by I think our visual presence will be much stronger than our competitors’. I think it will be one of the places to go to for photography on the web, but that takes time and we don’t have too much of that.”

The website contains a lot of requests to “Subscribe to read the rest of this…” So has providing ‘teasers’ of the magazine content online increased sales of dispatches in print? Knight thinks probably not.

“The point is that this is a small operation paying for original content and we have to monetise it somehow. Giving it away on the web would probably not be smart at this stage in our evolution, especially as it is not an appropriate platform on which to read our content.”

Knight’s view on the media landscape

I asked Knight what his perspectives were on how the media landscape is changing.

“I think the media is changing but that is not such a bad thing as long as we have high standards. Delivery methods change all the time, big deal. TV did not, as predicted, kill off the radio and I doubt the web will kill off print or TV either.

“What is important is not the delivery system, it is the content, and when old media understands how to use the web, I think the web content will improve.

“I think MySpace and YouTube are not the media, nor are bloggers. They are the 21st century equivalent of Hyde Park Corner [sic] and youth clubs. The future of news delivery on the web demands better editing and citation so people know where to get reliable well written/filmed material.

“Currently, it’s like walking into a book store the size of a football field looking for a book to read on the beach. It’s confusing.”

Knight feels that publishing dispatches only in print will be sustainable. “We need depth, independence and clarity, not sound bites.”

Perhaps as Rosenblum puts it in the editor’s note, “Subjects as important as the fate of our world deserve the permanence of print.”