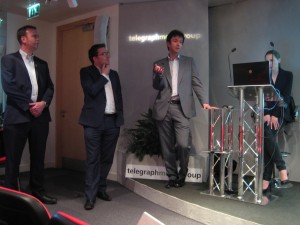 It began with some confusion, but an interested crowd filled the Telegraph’s presentation room for a pre-launch spiel on its new election application, Debate2010, last night.

Headed up by communities editor Kate Day, and in commercial partnership with Salesforce, the media group is touting the application as the first of its kind.

“It will allow people to comment on issues of importance to the country in real time,” he said.

The application will allow live comments and debates on topics set editorially, but users can also suggest their own topics. The ‘hotness’ of converstaions will be monitored and will likely influence the Telegraph’s election coverage.

Debates are currently set to be open for three days, but can be changed based on user demand.

The crowd wasn’t unanimous in support, however, and there was some discernable scepticism about its chances of success, and of its usability.

Joanne Jacobs suggested the site should allow the absorption of tweets and let users follow individual comments rather than the whole live debate.

There were also concerns raised about moderation and possible domination by particular people and interests.

The site will be post moderated in much the same way as all Telegraph.co.uk content is, with no tolerance for illegal or offensive comments. However, Day said the aim is to allow as many people to express their views as possible. Brogan added:

“This forum will not reward verbiage, it will reward original and interesting ideas.”

When asked about its user capacity, he quipped it was developed with the entire UK online population in mind.

Brogan and Day said the aim is not to generate new audiences or media content for the group, but admitted it would be a nice benefit.

Both said it is an experiment, and the outcomes – including its public and political influence – are unknown.

The tool is aimed at voters rather than politicians, and though cagey about whether they had been approached by political parties for a platform on the site, all were adamant it would not become a “politicians’ soapbox.”

Results of the rolling debates will be pooled, aggregated and published, to be handed to the future government as a “citizen’s briefing book”.