Newspaper front pages the morning after the leaders debate. Most newspapers also liveblogged the debate on their websites.

Last night saw the leaders of 7 political parties in the UK debate live on TV. But part and parcel of such a debate these days is the ‘second screen’ journalism of liveblogging. In this post I look at how different news organisations approached their own liveblogs, and what you can take from that if you plan to liveblog a debate in the future (for example this one).

Before the liveblog itself make sure you write articles that preview it and explain any background that will be needed during the live action.

The Spectator, for example, had written about Five things to watch for during tonight’s debate.

The Radio Times explained ‘everything you need to know’ about how the debate worked.

The Independent wrote a backgrounder on all 7 leaders

This material does two things: firstly it builds anticipation and readers for your liveblog (make sure all pieces link to the holding page for the liveblog), but more importantly it gives you material to link to from the liveblog itself to provide context and background.

Although the debate may start on the hour, it’s a good idea to start before then. The Spectator started 10 minutes early; the FT half an hour before.

What do you do during that lead-in time? Explain how the debate works, any useful background on the individuals involved, and a bit of colour on the setting.

If you’re on the scene itself you might start even earlier. ITV, The Telegraph and The Guardian started a full two hours before the debates themselves, blogging behind-the-scenes action as a way of establishing their access before the debate.

Don’t tell us what we can hear for ourselves

Liveblogging a TV event is largely a ‘second screen’ experience for users. That means they are probably watching the debate itself while following commentary on the liveblog and social media at the same time.

For that reason there is little point recording a blow-by-blow account of who said what. Instead look to add something. That might be:

Here for example is the FT summarising Cameron’s opening statement:

And here is the BBC factchecking a statement about welfare savings:

Here The Telegraph bring in readers with a live poll:

…while their social media integration focuses largely on fellow journalists, celebrities and politicians. 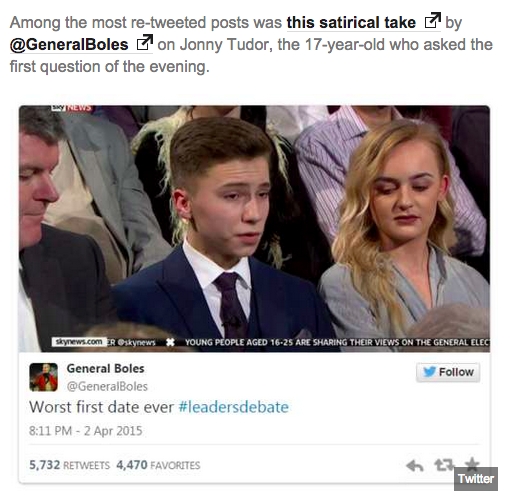 And the Guardian worked with pollsters BritainThinks to attempt a more scientific approach to social media canvassing:

More broadly, all liveblogs included photographs, video, charts and other visual elements. Here The Telegraph have some pre-prepared visual explainers on the policies: 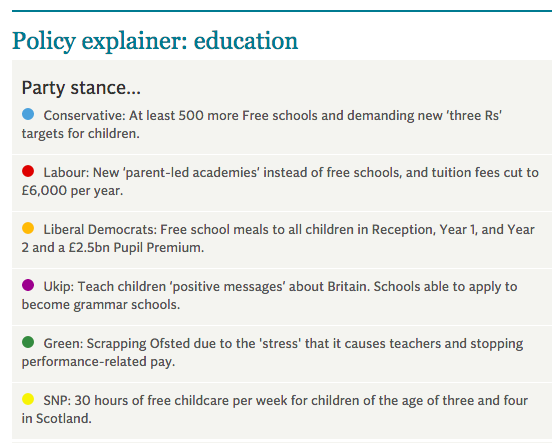 And here Sky prepared visuals specifically for social media, which were published on Twitter then pulled into their own liveblog:

And here the Independent embed video of a heckler’s contribution to the debate.

Much of the video may have been recorded directly from the TV itself. The clip above, for example, is typical of the networked publishing that takes place at speed: broadcast on ITV, recorded by Channel 4, placed on YouTube, and embedded by The Independent newspaper.

Don’t tell us about yourself

The audience are not interested in you and your opinions unless a) you’re actually at the event and can talk about that; or b) you are an expert in a particular field.

Of course you can inject a little colour if you are there, and you can inject some analysis if you are an expert, but for the most part remember that the audience will be making up their own minds about what they are watching.

One of the most striking things about the debates are just how different people’s experiences are: for some Nigel Farage was a car crash; for others he was the biggest winner.

Pace yourself – but don’t leave gaps

Two hours of liveblogging is hard work so it pays to have pre-prepared material to feed in when things get dull.

Have an idea of key moments.

Don’t forget to look at what people are saying online and tap into that: highlight the sharpest, wittiest and most colourful contributions.

Likewise don’t be afraid to link to other news organisations and other journalists, if it gives you more time to do your own thing.

It also pays to have eaten well beforehand – you will get hungry!

The debate doesn’t end when the debate ends

Although the leaders stopped talking around 10pm, coverage went on for some time after. The Telegraph, FT and Spectator all ended around an hour after; the Guardian and BBC didn’t stop until midnight.

During that time the focus shifts to reaction: polls, analysis of social media, and expert reaction to the debate overall from around the web.

This period is where preparation and contacts really come to the fore: having experts lined up; knowing where the polls are coming from; knowing who is on the inside and who is best placed for reaction.

But also having prepared the key questions that were to be answered, and notes on how well those were answered.

The Scotsman’s liveblog had a particularly good idea here: a Google Hangout where host Tom Peterkin discussed the debate with three guests on live video.

In many ways livebloggers are now learning the same craft that sports commentators have been practising for years: doing your homework pays off.

Round up at the end – with links

A good liveblog always sums up at the end. This is typically done with bullet points, some of which link to articles written during the debate itself or prepared in advance. 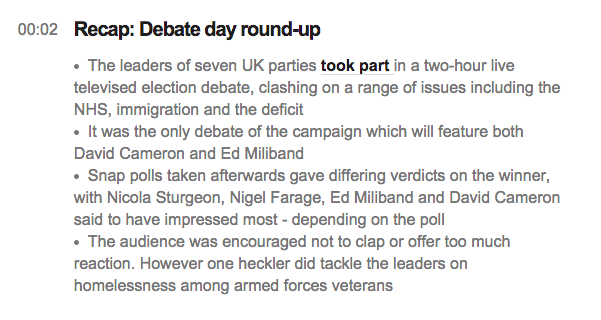 The Telegraph, for example, sums up with 5 bullet points, each linking to an article elsewhere on the site: from an analysis of Twitter reaction and another on Cameron’s performance, to a report on a heckler’s intervention, an ‘expert’ rating of how each leader did, and an article on the ‘declared’ winner of the debate overall.

The Guardian’s summary is more wordy and links internally to updates within the liveblog itself.

The Spectator pointed readers to a special podcast analysing the debate – although forgot to link to it.

The Independent merely say: “That’s all from us tonight! For more news and the reaction as it comes in, head over to independent.co.uk” and put their links in the introduction above the embedded liveblog.

This last part emphasises the key consideration in liveblogging: who is your audience and what do they expect?

The Telegraph’s audience is interested in an analysis of Cameron’s performance; The Guardian’s audience is more likely to want to know how Miliband performed. A local newspaper will focus on local issues; a business publication on financial and economic ones.

It is essential that you differentiate your coverage in some way from the others, or what is the point? That is done partly through style and emphasis, but largely in where you focus your preparation: what is your expertise, and how do you develop and deploy that live?

Don’t forget the morning after

Sky were just one news organisation to liveblog ‘The Morning After The Night Before’ – in fact it was the same liveblog re-titled.

The BBC’s election liveblog simply rolls on to another day. The Guardian were still liveblogging the question ‘Who won?’ 12 hours later as news organisations and political parties continue the battle to claim victory for their side.

If you’re chasing reaction to the debate – relevant to your audience (local, specialist) – then there’s no reason you cannot liveblog that too.

But even if you don’t continue to liveblog the aftermath of the event, you should be writing up at least one article on the event itself. After all, if you’ve spent a couple hours liveblogging it, you should have more than enough material to condense into a traditional report on the key events of the night.

After all that, take a rest, review what you did well – and what everyone else did better – and make plans to do it better still next time.