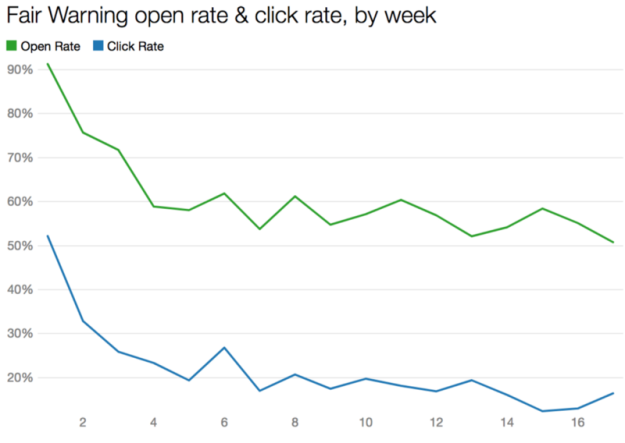 As the first group of MA Data Journalism students prepare to start their course this month, I’ve been recommending a number of email newsletters in the field that they should be following — and I thought I should share it here too.

Here, then, are 9 email newsletters about data — if I’ve missed any please let me know. END_OF_DOCUMENT_TOKEN_TO_BE_REPLACED

The European Journalism Centre and Open Knowledge Foundation are organising panel discussions and workshops as part of a School of Data Journalism at this year’s journalism festival in Perugia. More details here; registration here.

Image by Mr T in DC

When you start publishing online you move from the well-thumbed areas of defamation and libel, contempt of court and privilege and privacy to a whole new world of laws and licences.

This is a place where laws you never knew existed can be applied to your work – while other ones can come in surprisingly useful. Here are the key ones:

END_OF_DOCUMENT_TOKEN_TO_BE_REPLACED

I’ve contributed to a “free, open-source book that aims to help journalists to use data to improve the news” – and it has now been published online (Saturday 28th April)

END_OF_DOCUMENT_TOKEN_TO_BE_REPLACED

In a guest post for the Online Journalism Blog, Christiane Schulzki-Haddouti explains how participants at an open data event helped crack open data on German aid spending. This post was originally published in German at Hyperland.

How does the foreign aid of Germany support other countries? The Federal Ministry of Economic Cooperation and Development (BMZ) releases no details, although about 6 billion euros is made available for aid every year. Now the Open Knowledge Foundation in Germany has broken down the data – with the unintended help of the OECD.

Until now it was a mystery to the German public which countries benefit, and to what extent, from their government’s spending on foreign aid: the BMZ publishes only a list of the countries that receive aid (PDF). It was also not known which particular sectors in these countries were being supported.

For the political scientist Christian Kreutz, member of the Open Knowledge Foundation Germany, the BMZ database for development aid was just disappointing:

“The relevant information is scattered, little data is available in open formats and a breakdown of financial data such as project expenses is not yet published.”

In the course of the Open Aid Data Conference in Berlin, participants decided to tackle the situation. They noted that there has long been a public database at international level which explains the expenditures at a larger scale: the BMZ regularly reports its data as part of “Official Development Assistance” (ODA) to the Organisation for Economic Co-operation and Development, better known as the OECD.

Now the data is also available on the website Aid Data.

For two days Christian Kreutz wrangled with the data sets, then he presented his first results on a new open-data map. More than half the ODA payments come from the BMZ, the rest come from other ministries. Kreutz concludes: “Hardly any country receives nothing.”

Interestingly, not only classic developing countries are supported. The lion’s share goes to BRIC countries, namely Brazil, Russia, India and China which have profited from high economic growth for years.

Current sites of conflict receive quite a lot of money: Iraq received 7 billion euros, with the majority coming from debt cancellation. A similar situation is found in Nigeria and Cameroon.

In comparison Afghanistan and Pakistan receive only about 1.2 billion euros.

Even authoritarian regimes benefit from German development aid: Syria received around 1 billion euros. A large proportion of the money is spent on debt relief as well as water and education projects.

Payment information was also combined with data from the Economist on democratic development. Here a kind of rule of thumb can be recognised: countries which are less democratic are encouraged.

Egypt, for example, not only received support for water projects and its textile industry, but also for its border police – by an unspecified federal ministry.

BMZ is opening up

The new aid data map does not break down numbers by donors yet. But it could do so, as the detailed OECD data supports it.

Christian Kreutz has filed a Freedom of Information Act request with the BMZ to get further data. But the ministry is already showing signs of movement: a spokesperson said that project funding data will be published soon on the ministry’s website.

The interesting question is how open and accessible the BMZ data will be. Recipients of ODA funds can not be inferred directly from the OECD database. Open data activists hope that the BMZ will not hide the data behind a restrictive search interface to prevent further analysis, à la Farmsubsidy.

The Open Knowledge Foundation have published a blog post with notes on a site they’re developing to gather together data from across Europe. The post notes that the growth of data catalogues at both a national level (mentioning the Digitalisér.dk data portal run by the Danish National IT and Telecom Agency) and “countless city level initiatives across Europe as well – from Helsinki to Munich, Paris to Zaragoza.” with many more initiatives “in the pipeline with plans to launch in the next 6 to 12 months.”

“[It] will harvest and federate this information to enable users to search, query, process, cache and perform other automated tasks on the data from a single place. This helps to solve the “discoverability problem” of finding interesting data across many different government websites, at many different levels of government, and across the many governments in Europe.”

What is perhaps even more interesting for journalists is that the site plans to:

That might include anything from cleaner versions of data, to instances where developers match datasets together, or where users add annotations that add context to a particular piece of information.

Finally there’s a general indication that the site hopes to further lower the bar for data and collaborative journalism by:

“Providing basic data analysis and visualisation tools together with more in-depth resources for those looking to dig deeper into the data. Users will be able to personalise their data browsing experience by being able to save links and create notes and comments on datasets.”

More in the post itself. Worth keeping an eye on.