Was the campaign against Jan Moir that crashed the PCC website “heavily orchestrated”? Jan Moir herself thinks so. Was it “organised”? The deputy editor of the Telegraph said it was.

If this was the case, who was organising this? “The big gay who runs the internet“? Stephen Fry?

And what do they mean by organised?

Of the 3 descriptions, the only one that might apply in this case is the third, and here’s the rub. Imagine the Jan Moir fuss in a world without Twitter: here’s how it unfolded:

In a world without Twitter the above might unfold over a series of days. The difference in a world with Twitter is that the above process is accelerated beyond the ability of many people to see, and they think Step 4 is where it begins.

But why does it matter if it’s organised?

Although different people may have different (oppositional, negotiated) readings I would argue this is the dominant one, where the discourse of ‘organised’ is being used to marginalise the protests. I will make a bet here that the PCC use that discourse in how they deal with the record numbers of complaints.

Stef Lewandowski hit the nail on the head when he said that it sounded “like the argument from design applied to social media”.

Help me investigate this

But what would be really interesting here is to test the hypotheses against some evidence: I want to see just how organised the ‘campaign’ was. How important were the celebrities and the formal organisations?

I’m using Help Me Investigate to see if we can work out what level of organisation there was in the campaign. So far, thanks to Kevin Sablan we have a key part of the evidence: all the #janmoir tweets since October 14. And some suggestions on how to analyse that from Ethan Zuckerman (who’s been here before): “grab all #janmoir tweets, do word freq. analysis esp on RTs, look to see if it’s grassroots or one instigator, amplified…”

If you need an invite, let me know.

And if you have any ideas how you can measure the organisation of a campaign like this, I’d welcome them. 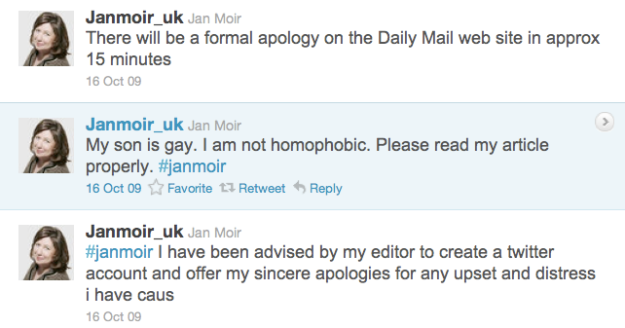 If you were following the Jan Moir-Stephen Gateley story that was all over Twitter today you may have come across a Twitter account claiming to be Jan Moir herself – @janmoir_uk. It wasn’t her – but it was a convincing attempt, and I thought it might be worth picking out how I and other Twitter users tried to work out the account’s legitimacy.

The first test in these cases is the too-good-to-be-true test, and this works on a number of levels. Jan Moir tweeting in itself was a great story – but not completely unbelievable. Her second tweet said “I have been advised by my editor to create a twitter account and offer my sincere apologies for any upset and distress i have caus” [sic] – a superficially plausible story. Would you buy it?

But there were some other too-good-to-be-true claims in her tweets. One said “My son is gay. I am not homophobic. Please read my article properly.” Does Jan Moir have a son? Is he gay? Would she announce it on Twitter? END_OF_DOCUMENT_TOKEN_TO_BE_REPLACED