A wonderful headline malfunction at the Telegraph, in their story about the Dawkins Forum dustup, where the discussion forums at richarddawkins.net have been summarily suspended and made “read only” (*): 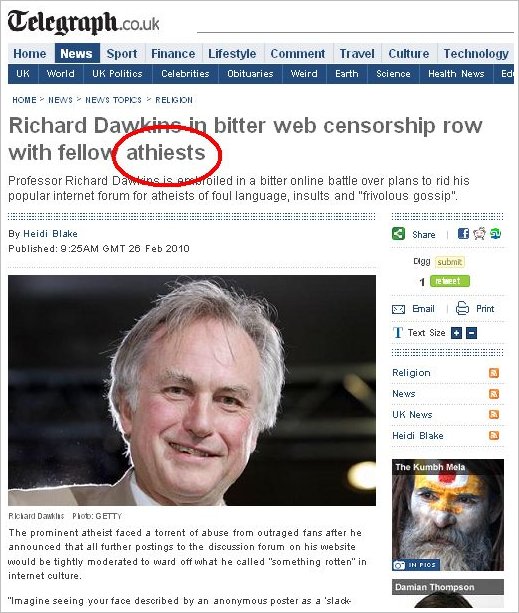 So, what are you?

(*) My take is that the Telegraph is rushing to catch up with a “religion” story that the Times got hold of first when blogger Chris Wilkins tipped them off (and updated later). Ruth Gledhill already had an interview with Richard Dawkins done before it even appeared on the Telegraph website. The Telegraph piece reads slighty like a digested and regurgitated version of the previous one in the Times.

They all seem to have got the wrong end of the stick in several respects, including Richard Dawkins himself, and are playing the “nasty rotten horrible anonymous internet culture” tune. Further, newspapers seem to have invented an intra-atheist culture war where one doesn’t exist, albeit based partially on Richard Dawkins’ own misapprehensions.

The actual history is well summarised by blogposts by former moderators Pete Harrison, Jerome23 and Darkchilde. The problem is not that the forum has closed; it is of the way the process has been (mis)managed – particularly because RD has taken a very hands-off approach and backed his employed staff over his volunteer moderators, when it is the former who may well be in he wrong.

The vitriol is being generated because volunteer moderators who have invested hundreds of hours building an online community, and the members of that community, have had their community summarily yanked from beneath them, and had their means of communicating with each other turned off. RD’s “Outrage” response is a restatement of a line from his employed staff which does not match the facts.