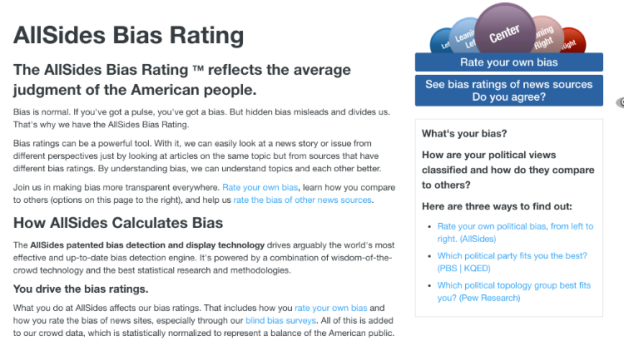 As part of a series of articles on the innovators tackling the filter bubble phenomenon, Andrew Brightwell interviews John Gable, founder and CEO of AllSides, a website that has devised its own way to present alternative perspectives on American news.

When a man who helped build the first successful web browser says there’s something wrong with the Internet, it probably pays to listen.

“The internet is broken.”

John Gable’s diagnosis has authority: he has more than 30 years in the tech business, including stints at Microsoft, AOL and as a product manager for Netscape Navigator.

Now he is founder and CEO of AllSides Inc, a news website with a distinct mission. Visit AllSides.com and it offers the news you’d expect on any US politics site, except that its lead stories include a choice of articles: one from the left, centre and right.

“The headlines are so radically different that even reading [them together] tells you more about that topic than reading one story all the way through.”

END_OF_DOCUMENT_TOKEN_TO_BE_REPLACED

One of my abiding memories of the 1997 General Election involves bumping into a candidate from one of the major parties in a beer cellar. The candidate was supposed to have been on air at the time, participating in a live hustings for the small local radio station I was working for.

During a short conversation with them it quickly became clear that they felt an informal meet and greet with a bunch of bemused students was a better use of their time.

A decade and a half later I hoped this sort of incident was a thing of the past. But is that the case? END_OF_DOCUMENT_TOKEN_TO_BE_REPLACED

In the third and final post of this series Patrick Scott had a look at the click-through rate (CTR) of some famous individual Twitter users and found that those who do best tend to be political.

In the first post of this series we saw that regional newspapers that tend to do well on Twitter follow a larger proportion of people relative to the number of people following them.

Conversely, in the second post of the series we saw that this ratio of followers to followed is less significant for magazines. The successful magazine accounts tended to be more personable than personal and gave their followers a clear engagement pathway to go down.

In this post we will see that, like the regional newspapers, famous individuals with a higher CTR tend to have a better followers to followed ratio, although there are a couple of notable exceptions to this. END_OF_DOCUMENT_TOKEN_TO_BE_REPLACED

It’s been over 2 years since I stopped doing the ‘Something for the Weekend’ series. I thought I would revive it with a tutorial on They Work For You and Google Refine…

If you want to add political context to a spreadsheet – say you need to know what political parties a list of constituencies voted for, or the MPs for those constituencies – the They Work For You API can save you hours of fiddling – if you know how to use it. END_OF_DOCUMENT_TOKEN_TO_BE_REPLACED

It’s been over 2 years since I stopped doing the ‘Something for the Weekend’ series. I thought I would revive it with a tutorial on They Work For You and Google Refine…

If you want to add political context to a spreadsheet – say you need to know what political parties a list of constituencies voted for, or the MPs for those constituencies – the They Work For You API can save you hours of fiddling – if you know how to use it.

An API is – for the purposes of journalists – a way of asking questions for reams of data. For example, you can use an API to ask “What constituency is each of these postcodes in?” or “When did these politicians enter office?” or even “Can you show me an image of these people?”

The They Work For You API will give answers to a range of UK political questions on subjects including Lords, MLAs (Members of the Legislative Assembly in Northern Ireland), MPs, MSPs (Members of the Scottish Parliament), select committees, debates, written answers, statements and constituencies.

When you combine that API with Google Refine you can fill a whole spreadsheet with additional political data, allowing you to answer questions you might otherwise not be able to.

I’ve written before on how to use Google Refine to pull data into a spreadsheet from the Google Maps API and the UK Postcodes API, but this post takes things a bit further because the They Work For You API requires something called a ‘key’. This is quite common with APIs so knowing how to use them is – well – key. If you need extra help, try those tutorials first. END_OF_DOCUMENT_TOKEN_TO_BE_REPLACED

Having worked for the BBC News Entertainment website for a decade, Darryl Chamberlain took voluntary redundancy and set up the widely successful 853 Blog. As part of the Hyperlocal Voices series he shares some of the secrets of his success.

1) Who where the people behind the blog, and what where their backgrounds?

853’s all mine. My background’s actually in showbiz news. I worked for the BBC News website’s entertainment desk for a decade in a variety of roles – mainly sub-editing and being the daily editor, but also reporting and feature writing.

I took voluntary redundancy and a career break in 2009 – standing in a council election in May 2010, and doing odd bits of freelance work. While standing in an election will probably leave me hopelessly biased in many eyes, it helped introduce me to local issues which simply weren’t being touched, and potential contacts of all political hues. After my glorious defeat, I realised I could do a bit more for my local area by sticking to what I was good at – finding things out and writing about them. END_OF_DOCUMENT_TOKEN_TO_BE_REPLACED

There have been several events and reports worthy of note in the last week in the world of local blogs and websites .

Recently I gave an interview about current directions in the world of local blogging, for one part of a Wired Intelligence Briefing, to @jamiedouglas.

The whole presentation identified “10 current trends in 20 minutes”, which characterise our environment:

Also worth a look is a report in the Guardian about the Talk About Local ’09 Unconference, held on Saturday 3rd October in Stoke-on-Trent:

Almost 100 people left their bedrooms, home offices and local community halls for talkaboutlocal’s inaugural unconference this weekend. Some attendees in Stoke-on-Trent are professional journalists, starting out on their own against a backdrop of local and regional press lay-offs and closures, some have a political cause to fight while others quite simply want to give a voice to a community not well-served by a newspaper industry retracting and centralising.

Definitive numbers of these hyperlocal sites are hard to come by but the website www.nutshell.org.uk has already listed more than 50.

The event organiser, William Perrin, from TalkAboutLocal.org says: “People have always wanted to get involved to make things better and suddenly they can do it for themselves. The web 2.0 tools provide platforms that are incredibly easy to use, without any real cost.”

In the Guardian, the report author mentioned the practice of Stoke City Council to treat “Citizen Journalists” as being different from ‘real journalists’:

The town hall which PitsnPots set up to scrutinise has been less welcoming. Stoke Council’s head of PR and communications, Dan Barton, explained that bloggers would not be invited to briefings and are excluded from sitting at the press table in the council chamber.

“Opinion should be encouraged but we do draw a distinction between what is news otherwise we are in danger of de-valuing the role of journalists,” he said.

The National Association of Local Councils (NALC) is currently updating its guide to include the rise of social media networks but looks unlikely to change the definition of who gets treated as a journalist. A spokeswomen said: “We can say anecdotally that we would encourage councils to treat only accredited journalists as journalists. And treat citizen journalists as citizens. But that does not stop citizen journalists making enquiries in the normal way … And there is no reason why media releases cannot be available to everyone as they are public documents.”

I’d suggest that this is a ludicrous position to take, bearing in mind the extent to which news and opinion are mixed in the local (and especially the national) media, and also the miraculous range of howlers and planted stories which appear regularly. To mention just two that I have covered in the the last 5 weeks, remember the non-fact-checked Mayor of Baltimore spoof, which appeared in half a dozen national media outlets, and the Alan Sugar on Terrorism Death List story, which was invented out of the air and swallowed by the Sun?

I’d assert the opposite position: that thoughtful and careful bloggers, whether our beat is “local”, “subject-based”, “professional”, “political”, “technical”, or anything else, have potential to increase significantly the range and quality of niche coverage, due our tighter focus and our freedom from a need to work tightly to deadlines and volume of output requirements.

There are two clusters of issues that we need to address:

I’ll cover these issues more in a future article, but I think it is time for local bloggers to go on the front-foot; the decline in local media has left the gate wide-open.

Two places to start are firstly to write for other outlets, such as your local newspaper and sites which are regarded as “media” not “blogs”, and to see if you can get a UK Press Card. There are a range of bodies which issue UK Press Cards, and some people may come within the rules who do not realise that they do so.

Matt Wardman is an online consultant, and edits the Wardman Wire group political blog and Nutshell directory of local blogs and websites.