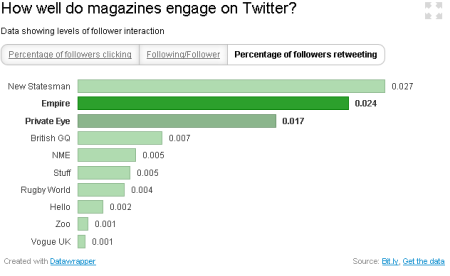 Magazine Twitter accounts with the highest click-through rates tend to be aimed more directly at the reader and to give the reader a clearly defined reason to engage, according to an analysis by Patrick Scott in the second of a series of three posts.

When analysing the engagement on the Twitter accounts of regional newspapers we saw that one of the key factors was how conversational the newspaper was with its followers. But does this still apply when dealing with national publications? END_OF_DOCUMENT_TOKEN_TO_BE_REPLACED